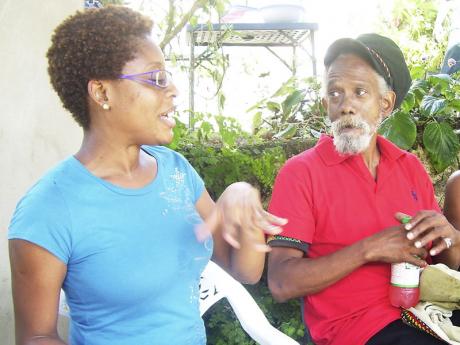 Amba Chevannes, daughter of the late Professor Barry Chevannes, in discussion with Arthur Newland during a ceremony to commemorate the 73rd anniversary of Chevannes' birth, held on Monday in Woodside, St Mary.-PHOTO BY CABBRINA LENNOX

WOODSIDE, St Mary:THE LATE Professor Barry Chevannes was on Monday revered as a great man when family and friends got together to commemorate the 73rd anniversary of his birth.

Dr Erna Brodber, former lecturer of sociology at the University of the West Indies (UWI), paid tribute to Chevannes at the ceremony where an incomplete building was named in honour of him at Rock River, Woodside, St Mary.

Brodber said the Barry Chevannes Centre - Rural Lab will serve to facilitate rural sociology by allowing students of the UWI to explore local culture in Woodside.

"For me, particularly, he had been such a kind and good person, and he came here, and he was very interested in twinning this village with the Department of Sociology so that the students could understand rural sociology," said Brodber.

She continued: "Today is to remember that he was a moving force and very instrumental in getting it moving. The building will serve the UWI students when they come to the village to relax down here or it can be a camp site and a meeting spot for the academics."

She said the idea of a rural lab came about when she was working in the Department of Sociology.

She added: "I am even stronger in my view that our rural areas should be known by our people that they can claim it, and so I went to Barry, he saw what I was doing; Barry always saw my point. When I went to Barry, he said, 'Good idea', and when I went to John Maxwell he said, 'Good idea', and some of the faculty thought it was a good idea. Let us do this and create a rural space," she said.

Brodber told The Gleaner that Chevannes had arranged for a partnership between the Woodside Rural Lab and the UWI Faculty of Social Sciences, but that did not materialise.

Brodber wants assistance from the UWI to complete the lab.

"A friend of mine came from Guyana and left something and I sold them, and we are going to use the money to help to build the lab," said Brodber.

The Chevannes' family donated $10,000 towards the building of the lab.