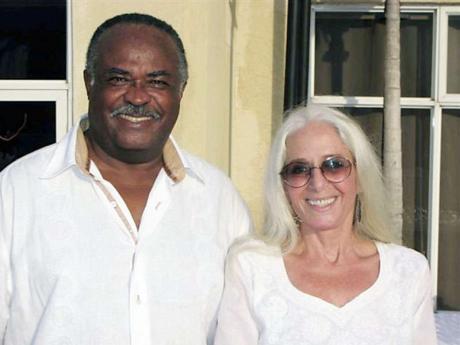 Susan Shirley is a celebrated American-born painter who has made Jamaica her home after her marriage to Jamaican Greg Shirley. The consummate hostess, she grills a mean lobster, but spent every summer of her early life at an all-boys summer camp which was operated by her parents.

She loved being 'one of the guys' and took great pride in matching their strides ... and often doing better! She recalls one of her earliest artistic endeavours back in 1953, which earned her father's ire as this particular drawing was done on one of his very favourite books, Wildwood Wisdom! The drawing is now a treasured addition to the family memorabilia.

Today, we share 10 things we did not know about artist Susan Shirley and like our previous features, they do make very interesting reading!

1. Often mistaken for a Canadian because of her Jamaican-American accent. Pah-leeze! Blame Canada!

2. She grew up with a series of family pets and rescue animals that included an owl, several raccoons, a hawk, a couple of ducks, a really obnoxious opossum and the usual snakes, turtles, frogs, salamanders, etc. All rescue pets were released when they were fully mature, a decision made after keeping their first raccoon 'Davie' (as in Davie Crocket, get it?) through the winter. There's a reason why wild animals are called wild!

3. She embraced the 1980s oversized glasses trend, even the classic tortoise shell version. She sported Sally J. Raphael's lipstick and red specs at their boldest.

4. Her university studies began at the College of Fine Arts at Michigan State University. After two years of trying to understand 'Hard Edge' and being berated for her tendencies to 'Realism' (VERY uncool in the '70s), Susan looked for another discipline that might still be art and creativity oriented. The College of Human Ecology seemed to fit and two years later, she graduated with her degree in interior design! In this field, she learned the principles and technical skills that she still uses today.

5. She designed, all by herself, her house on Carole Close, built in the late '80s. Her drawings were done up into working drawings by an architect friend as a favour. Unfortunately, the friend left in all the mistakes that she didn't know she had made. But even though hardly anyone ever 'knew' about these mistakes, she did and vowed never again to attempt something she wasn't qualified to do!

6. For years, she spelt her middle name wrong, as Lee, until she applied for her first driver's licence and the clerk corrected her by way of her birth certificate. She is, in fact, Susan Lea.

7. As a child, she would not allow anyone to address her other than as 'Sue'. She made a sudden switch in the late '60s and would only tolerate being referred to as Susan. This phenomenon coincided with early releases of Leonard Cohen's Suzzane. First, by Judy Collins in 1966, and then, by Joan Baez in 1971. Around the same time she met her future husband who always did and still does call her name as 'Suzanne'.

8. Was on her high-school synchronised swimming team. There were inter-school competitions, but all the stops were pulled for the annual Water Ballet Show. These shows were elaborately choreographed and the costumes were works of art. Backdrops, props and lighting gave the whole affair a highly theatrical air. A different theme, usually from a popular movie, was used each year. Man of La Mancha was one of the most memorable productions but her favourite memories are of performing a duet from What's New Pussy Cat and her exotic solo performance from Scheherazade.

9. The artist has a twin brother. No, they are not identical twins, but you would be surprised how many people ask!

10. When first moving to her current residence at Rio Nuevo, she became aware that some souls from different times were somehow left behind or perhaps they had decided to stay. Instead of having some form of ceremonial exorcism to make them go away, she decided to let them stay and even feel welcome. It became a regular part of her evening routine to pour out a small glass of white rum and leave on a table for our guests.

Susan's St Mary home is built on the cliffs of the Rio Nuevo Bay directly on the place where the Battle of Rio Nuevo took place. After the battle, the British lost little time setting up impressive plantations.

The planters lived comfortably affluent lives made possible by the exploitation of slaves. Around the area is vast evidence of both fine and humble living. All around Susan's land was home to families who loved, laughed, died and were buried. They are mostly forgotten, even the marble gravestones have been obliterated.