Windfarm operators aim to slash over J$1b from oil bill 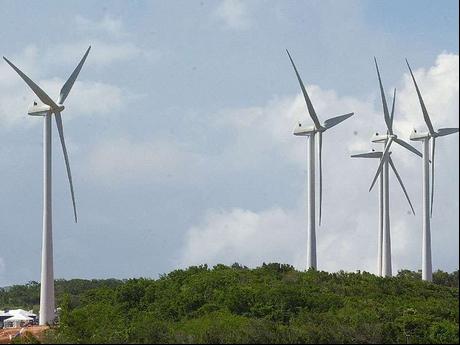 Economic windfalls are expected as wind operators seek to increase their supply of energy to the electricity grid to seven per cent from the current 2.5 per cent in the near term, saving more than J$1 billion annually in oil imports.

That is according to Dr Mario Anderson, group managing director, Petroleum Corporation of Jamaica (PCJ).

The PCJ-operated Wigton Windfarm in Manchester produced enough energy to save the country more than US$5.3 million (J$493 million) on oil imports during fiscal year 2011/12 or 47 per cent more year on year, due to its own expansion.

Dr Anderson said there are plans to generate a further 24 megawatts of wind power.

Another alternative energy supplier, Clean Alternative Energy Limited (CAEL), also plans to construct a 24 megawatt facility. That facility, to be based in Manchester, would raise the nation's wind energy output by some 60 per cent.

"CAEL is estimated to save Jamaica US$4 million per year in fuel import costs annually, as approximately 40,183 barrels of oil equivalent will be saved per year in imports at an average price of US$100," said the company in an environmental impact assessment report to the National Environment and Planning Agency.

The combined saving from Wigton and CAEL, however, would save only a fraction of Jamaicas annual oil bill, which hit US$2.4 billion in 2011. But the economic savings are augmented by the environmental benefits.

Wigton accumulated nearly 76,000 units of tradable carbon credits or certified emission reductions (CERs) in fiscal year ending 2012, equivalent to some US$375,000 based on estimates of existing rates.

Wigton earned some 52,000 CER units a year earlier. Carbon credits are worth about US$5 per tonne or unit.

CAEL said that its facility slated for Great Valley, Manchester would draw visitors to the area.

"The installation of the wind farm at Great Valley may lead to an increase in visitors to the area. There will likely be school trips as well as visits by persons who are interested in viewing the installation. The company said.

This may lead to increased commercial activity in the nearby towns. The Wigton farm located less than five kilometres from the proposed Great Valley wind-farm is said to receive thousands of visitors annually, it added.

CAEL plans to employ 100 persons during the nine to 12-month construction period but the cost of developing the wind-farm has not been disclosed.

Up to last year, the PCJ held the exclusive right to exploit and develop renewable resources in Jamaica.

In October 2012, the Government of Jamaica rescinded the PCJ's exclusivity, which in effect liberalised the renewable energy sector.