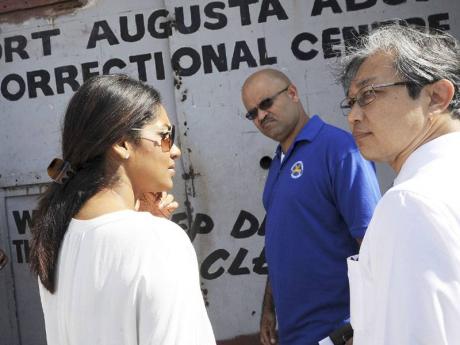 Psychiatrist Dr Aggrey Irons has said the recent spate of suicide attempts by wards of the state being housed at two of the country's adult prisons is not due to the conditions under which they are being held.

Instead, Irons, who visited both the Fort Augusta and Horizon adult remand centres yesterday with Youth Minister Lisa Hanna and other health professionals, said attempted suicides are "more often than not attention-seeking behaviour".

"We are dealing with a special population of young people who have depression, post-traumatic stress and so on," Irons told reporters after visiting wards at the Fort Augusta prison.

"I don't think the media and the rest of the country should get carried away by feeling there is some wave of suicide going on. That is totally not true," he insisted.

Prison officials have admitted that four female wards being housed at the Horizon and Fort Augusta prisons have attempted suicide in the last two weeks.

Last November, Vanessa Wint, a 16-year-old ward of the state, reportedly used a bed sheet to hang herself at Horizon.

Up to yesterday, there were 39 wards of the state being housed at Fort Augusta and 16 at Horizon.

The youth minister appeared satisfied with the conditions she saw at the two prisons, telling reporters after the two-hour visit that she saw facilities that were "clean, open and airy".

"Fort Augusta is not a dungeon of darkness as it is sometimes perceived by the public," she said.

Hanna said she stopped to talk with some of the wards and found that "neglect, sadness and where they are coming from" were some of the common factors among them.

"It is a situation that is sad because they are bright girls, talented girls. Some want to be paediatricians, some want to be soldiers, but they need focus and they are looking for attention," she reasoned.

But Opposition Spokesperson on Youth Olivia 'Babsy' Grange, in a statement yesterday, said the number of suicide attempts by wards of the state is "alarming" and demanded urgent attention.

"It is an alarming development which demands the immediate attention of the prime minister, the correctional services, the oversight ministries and, in fact, all Jamaicans who are concerned about the welfare of our children," said Grange.

She said Prime Minister Portia Simpson Miller should immediately remove these children to a facility that would enable them to get the appropriate and relevant psychosocial assistance.

"We cannot simply gloss over these incidents. It is obvious that something is terribly wrong and we must try to get to the root of it and I am imploring the prime minister to take some action now in determining the root cause of this crisis before it worsens," Grange insisted.

Hanna said one of the initiatives being contemplated by the Government to address the issue was the creation of a therapeutic centre for wards of the state.

She said the proposed centre, which would target behaviour modification in juvenile wards, has received the support of some of her Cabinet colleagues.