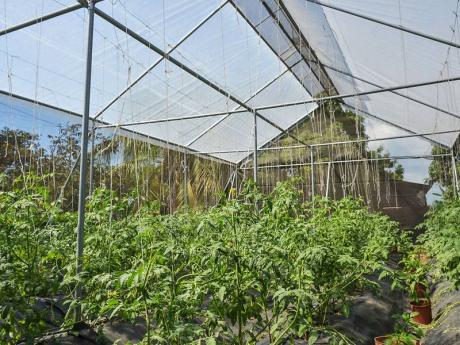 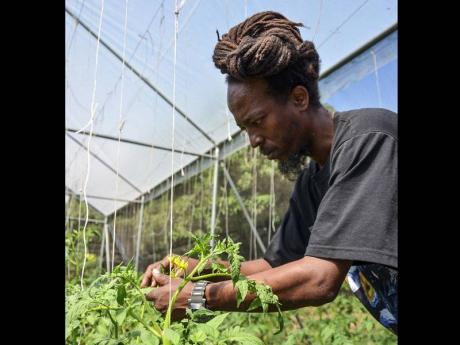 Project manager of the Trench Town Greenhouse Project, Donovan English, tends to tomato plants in the 30 by 40 square foot greenhouse farm located in the heart of the South St Andrew community.
1
2

The South St Andrew community of Trench Town, known as the cradle of reggae music, having produced some of the island's top musicians, including reggae icon Bob Marley, is now yielding bounty of a different sort.

In the heart of the community lies a flourishing greenhouse, where residents are engaged in cultivating vegetables to feed their families, while earning an income.

At first, the residents saw the farming activity as a means of food security for their families. But as tangible benefits are reaped, and persons are earning money to offset their living expenses, greenhouse farming is growing on the residents.

"Right around the community, the people love the farming," says project manager of the Trench Town Greenhouse, Donovan English.

The Trench Town Greenhouse farming project started in 2011 through the initiative of the Agency for Inner City Renewal, headed by Richard Lambie, a Canadian of Jamaican parentage. The agency helped the residents to craft a project proposal for financing, which was sent out for funding and financial institution, CITIBANK, and not-for-profit organisation, United Way of Jamaica, sponsored the initiative.

The project is fully community-owned, with the residents building and planting the greenhouse, and are now reaping and selling the produce. They benefited from training in greenhouse agronomics, construction, entrepreneurship and financial literacy.

So far, they have produced some of the best crops of pak choi, callaloo and tomatoes. Up to 20 pounds of tomatoes are reaped daily from inside the 30 by 40 square feet greenhouse.

Housewives, schools, and businesses purchase crops from the greenhouse farm and vendors at the nearby Coronation Market also source produce from the farm.

"From they hear that the thing is here, they come give us support," English states.

Six young men are employed full time on the farm, planting and replanting vegetables, and tending to their care, including uprooting weeds and watering.

Among them is Mark Ffrench, who sees the project as a blessing. "It's playing a great role because I was not working; and if I can do something and get a little stipend then I have to give thanks. Since the greenhouse come in, I see a lot of people I didn't even know. I never really know seh them people would be in farming and take it serious," he says.

amazed at its success

Though the greenhouse project is still in its infancy, stakeholders working in the community are amazed at its success.

"The greening of Trench Town, that's what I call it. I think food security, the ability of people to feed themselves, must take priority over everything else, except salvation," says Christian Social Entrepreneur, Dr Henley Morgan.

Lambie says the project has the potential to transform Trench Town, which has faced a lot of adversity due to tribalism and violence.

He notes, however, that the community is now "out of that system and they needed to see something to give them a sense of hope."

"This greenhouse is a major symbol of that. Every day I come here, I see persons coming in just to look at the greenhouse, whether things are selling or not. They come, they see it, they are inspired, they want to move on," Lambie says.

Greenhouses have also been established at Charlie Smith High, Trench Town High, and St Andrew Technical High, and students of these institutions are taught the rudiments of greenhouse farming.

"We are trying to promote financial literacy and entrepreneurship using agriculture," Lambie says.

The community is adamant that the project must be ongoing and entities such as the Rural Agricultural Development Authority have been brought on board to help with training in greenhouse production, with some 12 persons receiving training.

These persons are expected to branch out and build more greenhouse farms that will help to minimise unemployment in Trench Town as well as generate income.