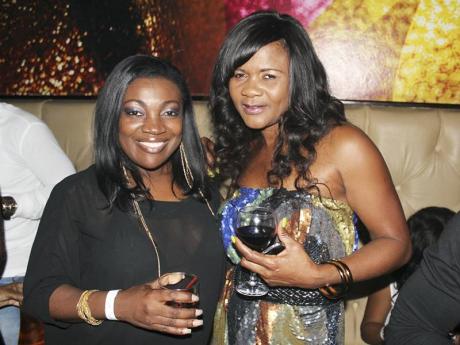 The Fiction Lounge was the place to be on Friday night if your aim was to party with celebrities. The club was studded with stars as local luminaries turned out to party the night away with international rap superstar and actress Eve.

Fiction's VIP concierge, Nicki Dean, explained that the nightlife hotspot partnered with Smirnoff for its weekly hosting of Famous Fridays to offer patrons an even more premium party experience. And it was definitely a famous Friday at the club as the who's who of the music circuit along with a few corporate big shots turned out to the A-list event.

Patrons were offered complimentary cocktails courtesy of the vodka giant. The event was also branded with the Smirnoff Midnight Circus insignia and appears to be a part of the liquor company's initiative to redefine Jamaica's nightlife experience.

DJ Lank doled out the hits and put on a noteworthy musical showcase. The DJ gave patrons a taste of all the popular eras of music from different genres, along with some contemporary hits. From pop to dancehall, to The Gangnam Style and, of course, soca. DJ Lank's selections proved irresistible.

Eve and the rest of her celebrity entourage did not arrive until around 2 a.m. The rap star made her way to her VIP booth where she was surrounded by party animals like Usain Bolt, Tina Matalon, Shaggy, and a list of other celebrities who were sure to help her have a good time.

The veteran rapper recently released the music video for her new single She Bad Bad, after a decade-long hiatus.

True to form, Eve's latest single plays up on the femme fatale's bad-girl image, and it is speculated that the song contains lyrical quips aimed at fellow female rap star Nicki Minaj.

One of the other reasons for Eve's stay in Jamaica has to do with segments she reportedly shot for an upcoming documentary.

It was clear that filming her documentary wasn't the only thing on her mind as she and her crew made their way inside the lounge.

Heading straight to the VIP section, the rapper sipped on Smirnoff drink mixes and chatted away into her crew's camera lens. Between filming, she sexily gyrated her waist to the dancehall and hip-hop beats that blasted from the speakers.

According to Smirnoff Brand Manager Marsha Lumley, it is all about giving the consumers extraordinary experiences.

"Once again, Smirnoff consumers have another opportunity to enjoy an amazing nightlife with one of hip-hop's best female rappers - Eve. It doesn't really get bigger than Eve partying with Smirnoff consumers," said Lumley.