More taxes on the way 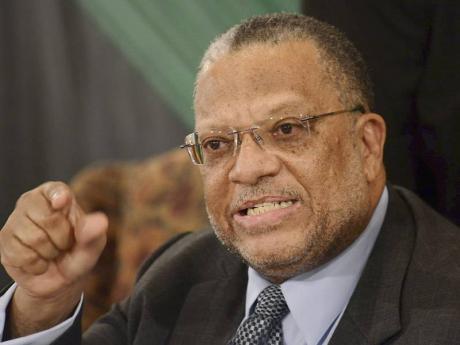 AFTER HEAPING $23 billion in new taxes on the backs of Jamaicans last year, Finance Minister Dr Peter Phillips has indicated that more tax measures are coming.

Phillips announced during a press conference at Jamaica House yesterday that the Government would be increasing its primary surplus from 6.3 per cent of gross domestic product (GDP) to 7.5 per cent next fiscal year.

Phillips said the target would be maintained until 2016-2017, adding that it is a critical plank of the debt-reduction programme.

A target of 7.5 per cent of GDP is approximately $97 billion.

Financial analyst Ralston Hyman yesterday said the Government would be making the economy smaller if it was to achieve the targeted increase in the primary surplus.

"Based on the state of the economy, it is going to be difficult for them to do that. Revenues are behind target and the balance in achieving the primary surplus would be more skewed to reducing spending," Hyman said.

He added: "It is going to be extreme pain ... . If there is going to be wage restraint in an environment where the dollar is sliding and prices are rising, it means that the standard of living is going to fall and more people are going to slip into poverty."

Phillips yesterday foreshadowed that an agreement may not be inked with the International Monetary Fund (IMF) until there is an agreement for wage freeze with public-sector workers.

"A firm commitment on wage restraint in the public sector is likely to be a prior action requirement of the programme," Phillips said.

"These measures will require sacrifice for all sectors of the society. However, that is the price we all have to pay if we are to achieve macroeconomic stability which is necessary for growth and for job creation."

He added: "The Cabinet insists that these burdens must be equitably shared and as far as possible, the most vulnerable in the society must be protected."

According to Phillips, the IMF programme being contemplated would contain a mechanism which would explicitly state the minimum that can be spent on social programmes such as the Programme of Advancement Through Health and Education.

In the meantime, Phillips said the IMF and Jamaica continue to discuss the issue of a voluntary liability management operation in relation to the debt.

"No haircut is contemplated. Cabinet is committed to the sustainability of the financial sector and the maintenance of its integrity," Phillips declared.

He said, however, that the Government "will be engaged further in voluntary and necessary debt-liability management because, as we said, sacrifices will have to be borne by all".