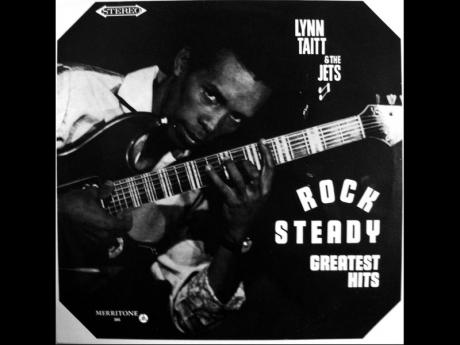 The history of Jamaica has often been reflected in its motto 'Out of many, one people'. The same can truly be said of its rich musical history, as many whose origins lay outside of Jamaica have made lasting contributions to a music that countless races and cultures have combined to make a unified whole.

In this respect, we remember Lord Creator and Lord Laro from Trinidad, Jackie Opel from Barbados, Rolando Alphonso and Laurel Aitken from Cuba, Carlos Malcolm from Panama, Dennis Syndrey from Australia and others. But the most important of them all was the guitar genius and band leader, Lynn Taitt from Trinidad.

Taitt's contribution to the development of Jamaican music is, to say the least, immeasurable. If ever there was an individual, who one could truly say has shaped Jamaica's rocksteady music, it must be Taitt.

It's important because rocksteady, which emerged in the mid-1960s, was one of the cornerstones on which present-day Jamaican music was built.

He was the mastermind behind a large portion of Jamaica's mid-to-late 1960s hit recordings, having been involved with either playing on, or arranging the music for the majority of authentic rocksteady hits of that period.

Boasting accomplished musicians like Hux Brown and himself on guitar, bassist Bryan Atkinson, drummer Joe Isaacs and pianist Gladstone Anderson, Taitt's band, Lyn Taitt and the Jets, not only backed hundreds of recordings, and did several commendable instrumental pieces, but became the most 'in demand' session band in Kingston from 1966 to 1968.

However, by age 15, he switched to the guitar after acquiring one from a friend for TT$20.

After learning it, he began taking it seriously by first playing with the group, The Dutch Brothers, but soon left them to form his own group. Taitt was spotted by popular band leader Byron Lee, while on one of his carnival sojourns in Trinidad, and contracted him to participate at Jamaica's Independence celebrations of 1962. Like fellow Trinidadian Lord Creator, Taitt fell in love with Jamaica and its music, and decided to stay.

In Jamaica, Taitt first played with the Sheiks and Cavaliers bands at dances and club functions, before forming Lyn Taitt and the Comets. The new group began doing recordings and live dates, although Taitt had already recorded as a guitarist with the Skatalites.

Putting together his classic aggregation Lynn Taitt and the Jets, which was to become the epitome of rocksteady music, Taitt worked for a time with Federal Records in 1966.

The move was timely insofar as rocksteady music was concerned, as Hopeton Lewis arrived at the studio during that same year, with the hope of recording an uptempo song.

Taitt was on the verge of creating history, and uncovered the first piece of his musical genius, which he described in his own words:

"Hopeton Lewis came to the Federal Recording Studios with a song called Take It Easy, and I find the beat was too fast, very fast. So I told them, "Let's do this one slow", and as the music got slower, it had spaces. The slower the music, it had more spaces to do something with, so I put a bass line and play guitar in unison with the bass, and I get a bass line and the piano, Sometimes I strum, sometimes I play a bass line with the bass. That was the first slow song. Nothing else was slow at that time, everything had been ska."

Taitt had, perhaps unwittingly, created a genre called rocksteady, after pianist Gladstone Anderson remarked on the rocksteady nature of the rhythm after finishing the final take.

Take It Easy remained a chart topper for several weeks. There was a rife debate, however, about whether or not another top recording, titled Hold Them, also arranged and played by Taitt, should be accorded the honour of being the first authentic rocksteady song.

Federal Records was also blessed with Taitt's arrangements and guitar artistry on the Paragons' Talking Love, The Gaylets' Silent River and I Like Your World, Hopeton Lewis's Sound And Pressure and Cool Collie, and the instrumental piece Napoleon Solo.

With the emergence of rocksteady, Taitt helped to shift the rhythmic focus to the bass and the drums, instead of emphasising the horns - a feature of ska.

This feature, which has remained an ingredient of dancehall music, has also helped to bring vocalists to the fore.

Taitt always seemed eager to give everybody a touch of his magic.

At producer Derrick Harriott's studio, he was associated with some stunning pieces like Been So Long, Solomon, Stop That Train and Tonight by Keith and Tex Harriott.

In relating the build-up to the recording Walk The Streets, which featured an exhilarating introductory guitar solo by Taitt, Harriott said:

"I didn't like it at first, and then I brought Lynn Taitt in, and immediately you could feel the difference."

Taitt helped to bring producer Bunny Lee into the business with Music Field, and played on other hits Do It To Me Baby and Let Me Go Girl, Slim Smith's 1967 No.1 hit.

Down by Eddie Seaga's WIRL, Taitt spiced The Gaylads recording Joy In The Morning, and the Ethiopians' Train To Skaville, while with J.J., he had the irrepressible Winey Winey.

The female producer Sonia Pottinger was not to be left out, as Taitt made his presence felt most palpably on The Melodians' Swing And Dine and Little Nut Tree, The Gaylads' Abc Rocksteady and Hard To Confess, and Ken Boothe's Lady With The Starlight and Say You. And there was also Taitt's unforgettable Hawaiian-style guitar performance on Joe White's Everynight.

One of Taitt's best arrangements, however, was on Johnny Nash's Hold Me Tight, a superb slice of pure rocksteady which reached No.5 on the UK charts in the summer of 1968. The list goes on endlessly.

Taitt had done more than slow the beat down, because the manner in which he arranged the instruments with the constant melodic bass line, defined the music that was to become known as reggae throughout the world.