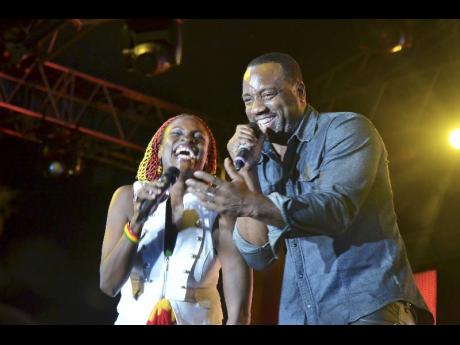 MC Jenny Jenny has fun with actor Malik Yoba who has starred in 'Cool Runnings' and Tyler Perry's 'Why Did I Get Married'. 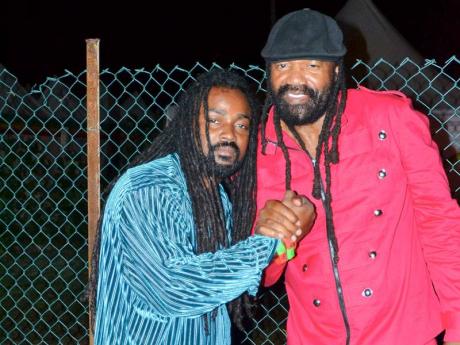 Long before Sizzla put the lid on Rebel Salute 2013 close to 8 a.m. yesterday, his fantastic form, shown in a flurry of large and small concerts in the latter part of 2012 carrying over into the new year, there had already been an on-stage comparison to a fabled Jamaican music festival.

Mutabaruka, poet and radio show host, said that he was reminded of Reggae Sunsplash - and, ironically, the Richmond Estate in St Ann was the last venue for a one-off staging of the revived Sunsplash in 2006. Chances are, though, he was referring to Sunsplash when it was hosted in Montego Bay - and the similarity was not only in the proximity of the sea, which licked at the edge of the venue - but the composition of the line-up and the size of the audience.

Rebel Salute enjoyed growth as a huge crowd turned out for the first second night in the festival's history, celebrating it 20th anniversary in a new venue and with an additional night, as well as a free day component. With its tagline being 'The Preservation of Reggae', Mutabaruka also made a comparison with Sunsplash in the composition of the line-up, being reflective of reggae's gamut.

And it was, complete with a touch of a reggae forerunner, mento, in the oh-so-swagging Jolly Boys in the earlier going, through to the thumping dancehall of Busy Signal in the closing stages as the sky lightened, yet again declaring his determination to never return to jail. Among those in between was the combination of Ernie Smith and Pluto Shervington, working in tandem and doing their songs out in full to an appreciative audience, which delighted in Shervington's Your Honour and the Smith's R&B Tears on My Pillow. Also on the musical seniors side of the night were The Mighty Diamonds, Pablo Moses, and The Abyssinians.

I-Wayne, introduced as a singer as well as a poet, keened his way in high-frequency into the audience's collective heart, slashing mercilessly at sexual immorality in a fusion of humour and anger in between popular songs such as Lava Ground.

Rain on Saturday morning, which turned especially the area just outside the audience's entrance and the turn-off into the very ample parking into a soggy mess (black plastic bags were going at $50 per foot, some ladies taking up the offer) proved a benefit to the Saturday night crowd. Three of the young reggae guns - Kabaka Pyramid, Protoje (joined by Jah9), and Chronixx - were unable to perform because of the downpour and became brawta for Salute's second night.

Chronixx grabbed the opportunity with both hands, putting on an extended showing that took the house down, climaxing with Odd Ras for which he noted the delightful contradiction between pre-conditioned expectations on a bouncy dancehall beat and the actual lyrical content. His voice sounded significantly stronger than at Sting 2013, where Chronixx had also moved the crowd.

Of reggae's younger guns, Iba Mahr also hit the spot with I Will, and Cali P's rapid-fire sections enthused the crowd.

Lady G commented on her enduring youthful appearance, saying that she had frozen her looks and noting that she had been with Salute from Manchester and St Elizabeth. She closed with a play on her 'property', bushiness and all, delighting the crowd immensely. Richie Spice stamped his class on the night with an extended set, from the opening acoustic style Free to the closing uptempo The Plane Land.

The Jamaican audience's varied musical tastes lapped up Singing Melody's lovers' rock with wild abandon, the opening Say What leading to the cover of Inspiration. A combination with Tony Curtis on Just As I Am took the house down to close.

In between the musical elders and their juniors, Robert Ffrench kept it short and effective with a pair of songs, and Prezident Brown sent praises to Jah Only.

Chezideck crooned homage to the herbs, a topic which resonated with the crowd.

Ifrica, in standard militant fashion, opened with a chant to the Lion of Judah, declared her disgust at "da suppen ya", prowled the stage as a 'lioness on the rise', and introduced Wayne J, a little boy who - as child performers tend to, although he showed more competence than many such - hit the spot. After her came I-Octane and Raging Fyah, put in the heat of the closing fire, and Sizzla.

On a marathon Salute second night there was sustained interest, with peaks of excitement, along the way. A moment of doubt came with Terror Fabulous, who roused the audience with his opening Jah Works, though not delivered close to anywhere near the deejay's considerable ability. However, he stalled on stage, an energetic Nadine Sutherland coming out for the two to do Anything For You (the multi-artiste song in which Fabulous has a standout part) and Action, which allowed for some recovery.