The men behind Jazz and Blues 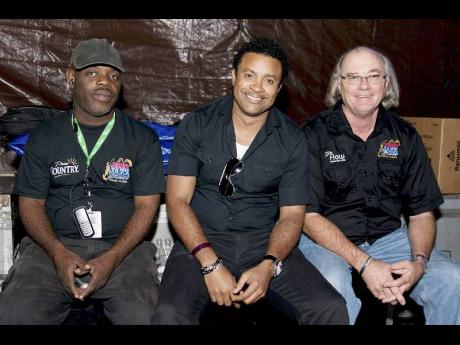 Over the years, fans attending the Jamaica Jazz and Blues Festival have become accustomed to air-tight production which has helped make the show one of the most popular in the Caribbean.

The 17th staging of the festival, to be held on January 24-26 at the Trelawny Multi-purpose Stadium, has a strong band of men with decades of experience collectively in the music business.

Walter Elmore is the figure most associated with the festival, but he has a crack team with him. Some of the men behind the magic are Junior Taylor, Robert 'Chuckles' Stewart, Sydney Reid, Mark 'Brigga' Brown, John DaCosta, Stone McLennon and Neil Terrelonge.

For the past three months, Junior Taylor, the head of the festival's production team, has worked tirelessly to ensure it's all systems go for the show. His responsibilities include booking the acts, producing the opening night, ensuring security and transportation are on spot and monitoring the VIP boxes. Though he has been working as a producer for live events since 1983, Taylor says he still gets the flutters as show time approaches. "On a scale of one to ten, the stress level can get to nine because you have to make sure everything is in place," he said. "Come Sunday (closing day), I can sleep late 'cause everything is done."

Robert 'Chuckles' Stewart says his role is deeply fulfilling. "Working as the production manager for the Jamaica Jazz andBlues Festival gives me a profound sense of accomplishment. Knowing the hard work of my team causes such a positive reaction from the artistes and audience, is deeply fulfilling," he said. Stewart is largely responsible for coordinating and facilitating communication between all production elements, including electrical, rigging, lighting, sound, stage sets and the import/export of equipment.

Sydney Reid has been part of the team from the show's inception, and is quick to tell you that his job as venue manager "is not as simple as it looks. Everything must be in place for everybody - from the artiste to sponsors to the peanut vendor," he explains. "You have to make sure it's a user-friendly venue." His functions include securing permits from local authorities, putting in place proper parking and getting emergency detail in order.

Veteran stage technician Mark 'Brigga' Brown is another unheralded production member. For nearly 30 years, he has helped musicians keep their instruments in tune as they prepare to hit the stage. "What I try and do is dialogue with the musicians, find out what they want before they go on," Brown says. As rigorous as the job is, he says, "It does open a lot of doors."

The superb lighting at the festival is the result of hard work from lighting/production designer John DaCosta and his team. DaCosta, who started out as an assistant over five years ago, describes the job as super-challenging but fulfilling. "I literally have to get to know each performer's lighting director and design the lighting to suit each act, while coordinating the overall look and feel of the festival," he said.

Stone McLennon, who takes care of the stage management of the festival and Neil Terrelonge, food court manager, are also member of the team that put on the three-day event. The combined efforts of these gentlemen and their teams produce the premiere music festival in the Caribbean.

Tickets are now available at www.jamaicajazzandblues.com.

General admission: US$50 for Thursday night, and US$80 to access the venue on Friday and Saturday nights.

Season passes: US$200, season passes which provide access to the event Thursday, Friday, and Saturday.

The organisers are offering savings on discounted weekend passes (Friday and Saturday only) at a rate of US$150.