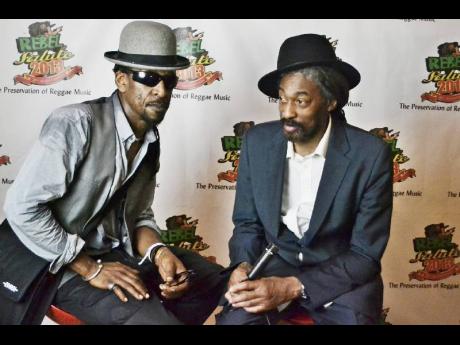 Tony Gad (left) and Drummie Zeb of Aswad have a conversation at Rebel Salute in St Ann. - Photo by Carl Gilchrist

But Drummie Zeb and long-time member Tony 'Gad' Robinson, who joined in 1980, have kept the Aswad flag flying as the group continues to deliver roots reggae to the world.

Performing in Jamaica for the first time in 20 years, the group's performance at Rebel Salute 2013 was professional.

Drummie Zeb alternated between singing lead vocals up front and sitting in the back, beating the drums while Tony Gad took over.

"It's good to be in Jamaica, to come back to the home of reggae is great!" Drummie Zeb told The Gleaner after exiting the stage last Saturday night.

But why the long absence from performing in Jamaica? Tony Gad provided the answer.

"The last time we performed in Jamaica was 20 years ago at (Reggae) Sunsplash. Is probably through we live ah England and it's too far for people to get we to come, but anytime they call, we'll be here for sure," Tony Gad said.

Aswad became one of the top bands in the United Kingdom in the 1980s, thriving on roots reggae and the positive message to the black youth, which offered them hope.

The group has had links with the home of reggae over the years. In 1977, they backed Burning Spear's performance at Rainbow Theatre in London, which was recorded and released as a live album (Burning Spear Live), while Dennis Brown used the rhythm from their song Love Fire (from the album New Chapter) for Promised Land, which became a major hit for the late reggae star.

The band itself is known in Jamaica more for its cover of Tina Turner's Don't Turn Around, which topped the UK charts in 1988. Despite the success of that love song, Aswad's reputation was built and rests solidly on roots reggae music.

But after 38 years, is the fire dwindling for the band and, more important, for roots reggae in England?

"The state of roots reggae in England is the same as it is around the world, every now and again you get a one tune that comes through," explained Tony Gad.

"The music is always still bubbling because all ah wi still deh deh, music a gwan but as always, we can always take more. So the more work we get, if all the artistes around the world gwaan push reggae music, it helps what is going on.

"As yuh see, is only me and Drummie now as original members, but the flag still a fly and we still ah drive the reggae car," he added.

With the group's last album being City Lock (2009, Bubblin' Records), which featured a live version of Don't Turn Around, they are currently doing studio work for a yet to be named or dated project.