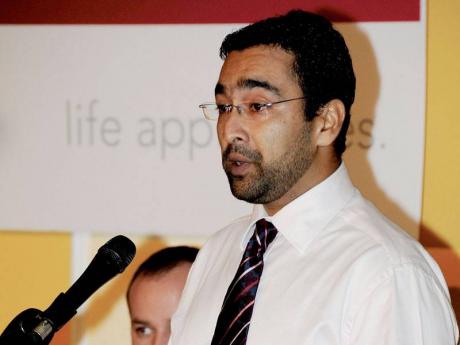 Geographer and businessman Krishna Vaswani aims to raise US$4 million of financing in order to set up a 15MW clean-energy facility.

The project, based on geothermal energy - heat from underground - would cost US$15 million of which US$4m would be raised via equity and the remainder as debt.

The developer would essentially be exchanging a 35 per cent stake in the venture in exchange for the equity.

"It's never been done before in Jamaica," he told 300 audience members.

"But it's proven interna-tionally and attractive for investors."

Vaswani was one of six entrepreneurs seeking venture capital funding at the closing day of the conference.

Participants in a panel session chaired by financial analyst Sushil Jain were given six minutes to pitch business plans to prospective investors.

Vaswani's venture sought the highest funding requirement but, according to him, offered the quickest return on investment. Additionally, it was the only innovative project that appeared. Geothermal exploration has never been done locally.

"The return on investment (ROI) would be less than a year. The nature of this project the ROI would be amongst the best in the world," said Vaswani. "Over the six minutes I spoke we would have generated over US$12,000," he said.

The other entrepreneurs sought funding for a T-shirt line; machinery to make bookmarks and key rings; online tickets store; and film.

Vaswani is part of a team of investors comprising oil and gas specialists and financial analysts. The team has already identified 12 locations across Jamaica, including one close to the Milk River attraction in Clarendon.

Renewable-energy projects are currently being screened by the Jamaican Government, which is reshaping its energy mix to incorporate 30 per cent of alternatives to oil by 2030.

The Office of Utilities Regulation (OUR) has opened bidding on 115 megawatts (MW) of clean-energy projects, which in the first round secured 85 expressions of interest from Jamaican and international sources.

Proposals must be submitted by April.

Vaswani said that his project would produce power at US$0.09 to US$0.15 per kilowatt hour. Consumers pay some US$0.40 for electricity from monopoly distributor Jamaica Public Service Company (JPS).

"We have energy beneath the core that can be used," said Vaswani.

"The project is well received and some of our locations are not close to these facilities," he said. "It's a power plant that can be done in half an acre. The environmental surrounding will not be harmed at all."