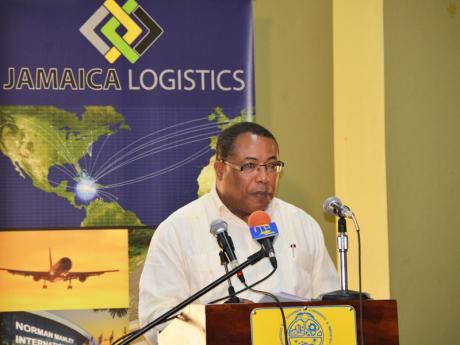 Minister of Industry Investment and Commerce Anthony Hylton says Jamaica has US$8-billion business opportunity arising from the ongoing expansion of the Panama Canal.

That's the value Hylton has placed on his Global Logistics Hub project.

However, while Jamaica plans other islands are already expanding to line up with the canal project slated for completion in 2015.

"We are late but we are an island of sprinters, so we can get there," Hylton said last Thursday on the closing day of the Jamaica Stock Exchange Investments & Capital Markets Conference.

"Ladies and gentlemen, this global transshipment hub represents an investment opportunity of US$7 billion to U$8 billion over five to 10 years. The logistic hub will extend the reach and borders of our traditional industries while facilitating the growth and development of new and diversified industries; move the country further up the global value chain," said Hylton.

The minister has been promoting the hub project in overseas markets, and is currently focused on pitching the project to local businesses.

"It is true to say that some of the projects outlined already have local interest," he said last Thursday.

Key local projects include a Port of Kingston expansion, a new trans-shipment port facility, a ship maintenance canal (dry dock), an economic zone at the Caymanas Estate, Vernam Field Airport development, and dredging of the Kingston Harbour. The dry dock alone can cost half the total amount — ranging between US$3 billion and US$4 billion.

But Jamaica, the closest island to Panama, needs to expand now in order to catch the expansion slated to finish in two years.

The Government has set up a logistics task force charged with coordinating the build-out of infrastructure.

The logistics task force held its first meeting on January 18-19.

"Let me say those two days were my best days in Government," Hylton said explaining that the project now represents the country's main development initiative.

"The global logistic hub initiative now represents a centrepiece of the country's economic growth strategy and therefore is a major initiative for driving growth," he said.

This mega-project would represent the largest ever investment for cash-strapped Jamaica. Funding is to be sourced from private or donor agencies.

"Let me point out that the multilaterals, including the World Bank and Inter-American Development Bank, have fully endorsed the project. The country representative at the World Bank signalled the support of the bank in his address to the gathering at the (task force retreat). Additionally, the Panamanian ambassador at the retreat indicated his strong interest in collaborating with Jamaica in realising the mutual benefits that can be derived," he said.

"I am convinced that these projects once implemented will drive Jamaica's short term and well into the future."

Bahamas, Cuba, Dominican Republic and Jamaica are the Caribbean territories either planning or expanding ports to accommodate new business from mega-ships due to the Panama Canal expansion.