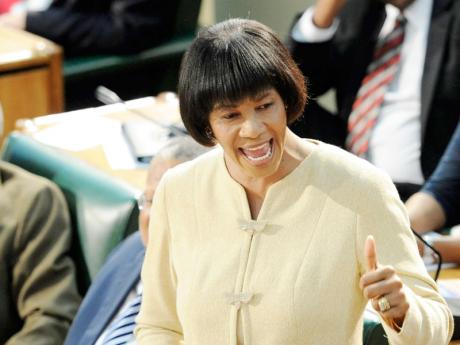 The five-year-old government entity set up to manage the Half-Way-Tree Transport Centre, Port Authority Management Service (PAMS), is continuing to record losses of millions of dollars, but this has not prevented it from paying its general manager at a level similar to that of Prime Minister Portia Simpson Miller.

Despite losing $2 million each month, PAMS paid out $47.43 million in salaries and related expenses for the 2011-2012 financial year.

PAMS's total losses for the year was $21.25 million, with its general manager, Victor Green, being given a pay package of $7.4 million to manage a transport centre that saw an average of 68,000 persons using the facility each day.

Green's salary was a shade below the approximately $8 million paid to Simpson Miller.

In its annual report tabled in Parliament recently, PAMS noted that last year was just as challenging as all the others since it started operating the transport centre in 2008.

PAMS noted that the transport centre, which caters exclusively to the Jamaica Urban Transit Company, has still not achieved the 138,000 average daily passengers which was projected when it was built.

In addition, the average daily dispatch of buses from the centre was 165. This is well below the more than 200 which was promised when the multimillion-dollar centre was being built.

According to PAMS, business strategies aimed at aligning revenue with expenses were implemented, but despite these, the centre was underfunded by $2 million monthly.

PAMS argued that several layers of private security inflated its cost, but for this year, it intends to reduce that expenditure by relying more on the police and less on security guards.

However, the company also admitted that its salaries and related expenses increased by $4.14 million last year and attributed this to "the government salary increase which took effect during the year".

PAMS is a subsidiary of the Port Authority of Jamaica, with its only source of income being what it gets from the management of the transport centre.

Since it started operations, the company has accumulated losses of some $91 million.

PAMS, like its parent company, the Port Authority of Jamaica, is a state-operated entity with a distinct legal form established to operate in commercial affairs.

It does not have the same guidelines as public-service entities.