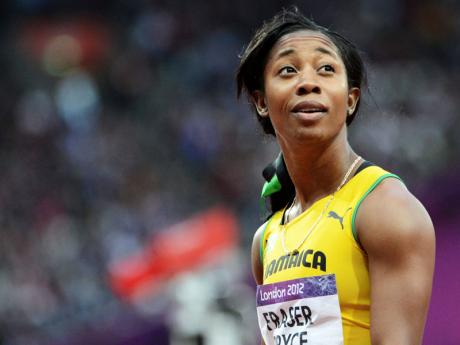 Fraser-Pryce clocked 11.47 seconds to take the Olympic Development 100m against rivals who were just not in her class. Rusheen Reid of the University of Technology (UTech) finished a distant second in 12.17 ahead of MVP's Kristina Gentles, 12.53.

Fraser-Pryce said she is comfortable with the pace of her season so far.

"It was okay, because I just ran the way my coach wanted to me to and I hope I did it," said Fraser-Pryce, who became the third woman in history to repeat as 100m Olympic champion, after stopping the clock at 10.75 seconds in the final in London last year.

"Overall, I am good. It is still early in the season and I am still in background training," Fraser-Pryce said. "This is my first time (this season) on chevron, and I am glad that I finished the race healthy."

Nesta Carter, the 2012 Olympics 4x100m relay gold medallist, won the male equivalent in an equally easy 10.59 seconds. Carter flew out of the blocks ahead of his opponents, but switched off after 60m, as he cruised to the finish line. Rondel Walker of UTech was second in 10.90 ahead of Dale Fearon of MVP, 10.96.

"I feel pretty good, because I am injury-free so far and I have a few indoor meets coming up, and so I am looking forward to that," Carter said.

National junior representative Chris-Ann Gordon of Holmwood Technical won her heat of the Class One girls' 800m in 2:12.03, to emerge the overall winner. Fellan

Jevaughn Minzie of Bog Walk High won the boys' Class One 200m time finals in 21.90. Other leading times were returned by Jevaughn Francis of Calabar (22.15) and Mario Williams of Kingston College (KC), 22.37.

KC's Clive Pullen captured the men's triple jump open with a leap of 15.04m ahead of Jordan Scott of Campion College (14.76m) and Clayton Brown of Jamaica College (14.51).