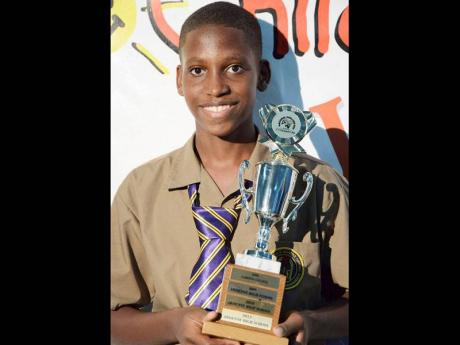 The
Gleaner's Children's Own Spelling Bee Championship for 2013, in
association with Jamaica National Building Society, will be held on
Wednesday, February 6, 2013, at The Jamaica Pegasus hotel, New Kingston,
starting at 9 a.m. Below are features on two of the parish champions.

IN HIS quest to be crowned The Gleaner's Children's Own National Spelling Bee champion for 2013, Christian Allen is working with a strong combination - the desire to win, being fully prepared and God's help.

It was the same strategy that the 13-year-old used last September to cop the parish championship title for St Andrew. However, he admitted that winning the big one would be no walk in the park, so he began preparing right after the parish competition.

"My preparation is going very well. I am studying everything at my disposal, including the dictionary and the new Spelling Bee book," he said confidently.

The high achiever developed a love for spelling from his days at St Andrew Preparatory School. He entered the parish competition in grade six, and again, as a first-form student, but the tile eluded him.

Now, it's the Reverend Glen Archer, acclaimed spell coach, who is readying the only child for Roger and Daunette Allen to challenge for the national title on February 6, at The Jamaica Pegasus hotel in New Kingston.

"I feel that I am prepared enough to win, but I have some more work to do to consolidate what I have done so far," noted the aspiring pilot.

His mom, a banker-echoed similar sentiments.

Similarly, his dad, a real estate agent who describes his son as 'very active with a sense of purpose' said, "I feel his chances are very good. Our whole focus as Christians, if we delight ourselves in the Lord, He will delight himself into us, but his chances are as good as any, because we know the work that he has done over the past two years," he told The Gleaner.

Nadine Molloy Young, his principal, oozed with confidence as she spoke about her scholar whose ultimate desire is to win the Scripps National Spelling Bee competition to be held in the United States of America later this year.

"Christian is one of those typical Ardenne students. he's humble, diligent, spends a lot of time on preparation, he's really very serious about it. We are really vey proud of him and we expect him to perform well. I would not be surprised to see Christian walking away as the top Spelling Bee champion in Jamaica," she said.