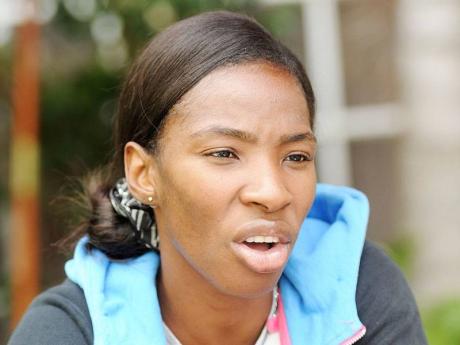 Melaine Walker makes a point while speaking to The Gleaner. - Ricardo Makyn/Staff Photographer

Jamaica's 400m hurdles Olympic champion, Melaine Walker, has finally broken her silence on the reasons behind her 2012 Olympic Games meltdown, pointing to issues with the Jamaica Athletics Administrative Association (JAAA), which she said "devastated" her and was the greatest factor behind her unforgettably dismal semi-final showing.

The 2009 World champion and 2011 silver medallist also admitted to not giving her best in London, discussed the regrets that have followed and confessed to harbouring thoughts of quitting.

"Based on past performances, it's obvious that it was not my best, but it was not done intentionally," said Walker of her London run. Walker, who entered the Olympic Games as a podium favourite, looked nothing close to her never-say-die self, as she cantered to one of the worst races in her career - an embarrassingly uninspired 55.74 seconds run in the semi-final, good enough for sixth place and ending her defence of the title she had won four years earlier at the 2008 Beijing Games.

The 30-year-old athlete was clearly perturbed before, during and after the race, offering little explanation to bewildered reporters after her race.

"I don't know what happened, maybe I'm not feeling the fire anymore," said Walker from the Mixed Zone beneath the London Olympic Stadium, over five months ago.

It was a much clearer Walker who met with The Gleaner late last week. Despite declining to give the full details, explaining that other athletes are involved and full disclosure would expose them, Walker noted that she was demotivated at the Games due to cases of JAAA neglect.

"There were definitely issues at the Olympics and they are very complicated. I always believe that when I compete, it's not just for myself but I am also looking at the future for athletes coming up and other stuff," said Walker.

"I guess what happened, there was so much going on, some of it is not my place to say, but more could have been done from a JAAA perspective," Walker added.

"However, what I can say is that I had been having problems most of the year since the Rome race. I wasn't able to sleep and that got me seventhin the Diamond League. Similarly, I had problems getting rest in London. Also, part of the problems that I cannot mention in detail is that I was taken aback by our officials' support to facilitate in some regard. I am not able to give definite scenarios, but I would imagine that we have earned the right to a certain level of professionalism and cognisance of Jamaican athletes. I just lost the fire. It was a human lapse. There was just too much happening," Walker continued.

"I remember cases where I had to be carrying bags of ice on my bag myself," Walker noted. "A lot of us won't look into stuff like that and think it's a problem, but when we see how other athletes are being catered for, we are all going to make our own judgements on how we think or believe the people who are ahead of us care or don't care.

"I don't want to say I was making a statement but internally I wasn't there, like I obviously wasn't able because I felt drained and it just did not come out right, but it's more to me as a state that any human being would experience in their life.

"We sometimes don't know how to react to stuff and the way I reacted wasn't the best, but normally in any rough situation, people don't react positively or in the best way, and I think that's what happened to me."