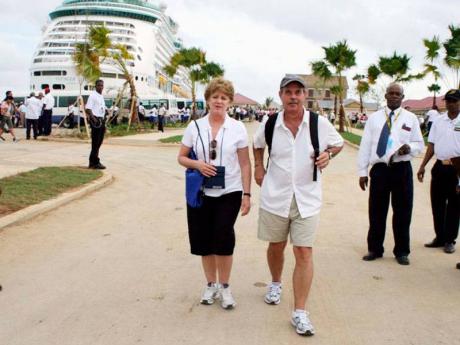 Texas couple Anne and David Robertson (foreground) leave the new Falmouth Pier in Trelawny after disembarking the Royal Caribbean cruise liner Voyager of the Seas on its arrival. - Photo by Ruddy Mathison

The Falmouth Pier in Trelawny, which has been dubbed the new hub of cruise shipping in Jamaica, has been given a failing grade by sixth form students of William Knibb Memorial High School, who are of the view that it is not measuring up to their expectations in terms of benefits to the town.

Tasanica Ellis, one of eight panellists, who discussed the topic Falmouth: Jamaica's new economic frontier, fact or fiction? during a Gleaner-Island Grill Youth Editors' Forum at her school, described the US$220-million cruise-shipping pier as a US$220-million "monstrosity" which has failed to bring any real benefit to the small man in the historic Georgian town.

"There is no benefit for the small man," said Ellis. "Everything is either boxed into the pier or is spread elsewhere outside of Falmouth. Only the investors in the pier reap any economic benefits."

Added Ellis: "We do not see any partnerships between the investors in the pier that will include the small man and allow for him to get any benefit."

Ellis went on to argue that more could be done to help retain the visitors in the town by developing new attractions and employing more people directly.

"They could develop the Burwood Beach and make it into a proper attraction that could see people gaining employment," said Ellis. "They could open a restaurant offering authentic Jamaican food and drink so the people would be inclined to stay here. Most of the cruise-ship visitors, who come to Falmouth, leave to Montego Bay (St James) or Ocho Rios (St Ann) to enjoy the attractions in those towns."

Nastascia Gossel, another of the panellists, decried the lack of development in the town while arguing that no provisions have been made to cause any benefit to trickle down to the general populace.

"When we look at Falmouth, it is a total disaster; the small businesses are not seeing any of the benefits that were promised from the development of the cruise-ship pier," argued Gossel. "The drainage system is seriously lacking; to be quite frank, Falmouth has hardly been developed over the past two years."

For Orlando Dowlatt, while the national coffers have benefited from foreign-exchange earnings, the "common man" in Trelawny has been left out of the equation.

"We are seeing that the pier has spurred some economic growth as the country on a whole has been benefiting from the foreign-exchange but for the common man, there is absolutely nothing," Dowlett contended.

The general consensus from the youth was that the pier, while offering economic benefits for the country as a whole, the "trickle down" effect was lacking as the town of Falmouth itself was not feeling the impact of the pier as was promulgated by the Government.