Younis at odds with Gov't over Lady Musgrave land 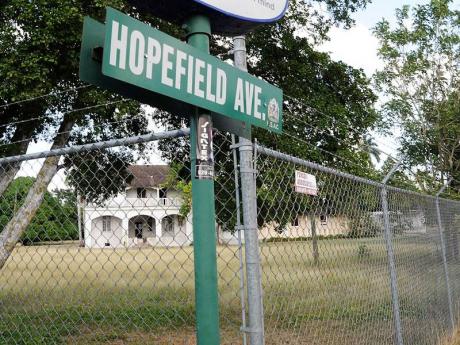 A week after a young homosexual man was doused with a flammable substance - allegedly lit by one of his cronies - and subsequently died, controversy rages over the ever-growing gang of self-proclaimed homosexual young men squatting on government land at 62 Lady Musgrave Road in the upscale Golden Triangle of St Andrew.

The Gleaner has discovered that the property is at the centre of a court battle involving well-known businessman Sameer Younis and the Government.

Younis has lodged a caveat on the government-owned lands located adjacent to premises he owns, on which the National Insurance Fund (NIF) planned to construct 66 apartments.

Younis has adamantly dismissed claims that his action has opened the floodgates for the group of mostly young men, who have been accused of terrorising residents in the area, to squat on the property.

"That is such a bunch of lies, whether the caveat is on it or not, it will not prevent the people from squatting," argued Younis. "I don't believe that people could have sunken so low as to blame me for what is clearly their fault."

Younis said the property, valued at between $70 and $80 million, is some distance from his home but he is still affected by the rowdy behaviour of the squatters.

"I can still hear the noise, but it must be causing the people there a lot of problems, because they are making a lot of noise and being a major nuisance," he complained. "The people are angry at the Government for allowing the squatters to be causing such a nuisance to all of us in the area ... ."

Younis said the government lands extend to a gully.

"The portion of lands on which the people are squatting are the property of the Government but they have not taken their fence to the gully, allowing the squatters to take control of the area ... now they are a nuisance. I called the police; the police tried once and twice and more ... .

"All they have to do is move their chain-link fence to the edge of the gully and the squatters will not be able to encroach on the land," argued Younis. "I have suggested to them recently, just move your chain-link fence and control your lands."

The status of the caveat at this time remains unclear as Younis has maintained that it has remained in force since 2000 when he took the Government to court during the late Donald Buchanan's tenure as housing minister.

"The only way (rescind it) is to go back to court. I know this Government, I know they are putting pressure,' he charged.

Well-placed government sources told The Gleaner that the NIF plans to build the 66 apartment units on the property, but Younis vowed that he would continue to resist such a move.

"The NIF is going to develop the lands which has been a source of nightmare because of the problem of squatting," asserted a source close to the development.

Countered Younis: "They want to put 66 apartments on the piece of land. If you have a piece of property, do you want 66 families to be looking over at you? The development is not in keeping with the restricted covenant, so we took them to court sometime in 2000 and they backed off and paid my legal fees and the caveat was lodged."

He vowed to keep the caveat in force until the Government changes its position. "We are trying to keep it (the area) as a single families home... ."

Asked whether he had an interest on the land, Younis said a friend of his wanted to purchase the property and repair the large house that remains.

He was also asked whether he desired the land personally.

"I would buy it from them to get them out of my hair," he declared. "They have not tried to develop it ... they have not written me and speak to me asking me if I objected to anything ... ."

The property appears to be a magnet for controversies as it accommodated the controversial 'spy base' in the 1990s from which wiretapping and other similar activities reportedly took place.