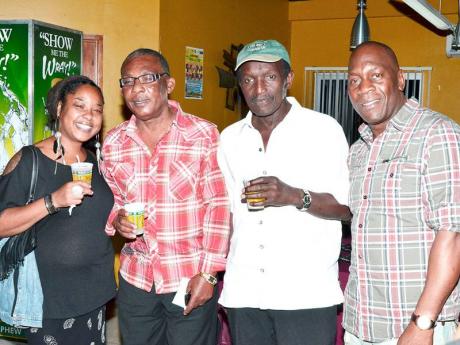 Artistes, musicians, sponsors, sponsors' representatives, media personnel and many fans were at the Overtime Lounge, National Housing Trust car park, on Wednesday, to welcome back Startime, Jamaica's most popular vintage concert, at its official relaunch.

The concert takes place on Saturday, February 16, at the Liguanea Club.

After an opening prayer by MKB director Keith Brown, MC Junior Sinclair, another of the MKB directors, kicked off the proceedings. Many persons expressed their delight that promoters MKB, who ended Startime's 18-year, 145-show run in 2006, had responded to public demand and brought the series back to life with Wray & Nephew's White Overproof Rum as the main sponsor.

One of the happiest persons was Wray & Nephew's marketing manager of rums, Cecil Smith, who expressed his delight at being able to step into the headline sponsorship role. "We at Wray & Nephew are big into events which meet our quality standards and have public appeal, and Startime fits the bill ideally. It's been a pleasure working with MKB thus far, and this is a partnership we are enjoying, even at this early stage," he said.

Pepsi Jamaica's Trade Marketing Manager Catherine Goodall said her company was equally delighted to be part of the sponsorship team as Startime "has a tremendous reputation and is an event which easily fits our sponsorship criteria".

On Stage TV's CEO Winford Williams spoke to his involvement with Startime from as far back as 1996 during his time at CVM TV, who are also sponsors of Startime, and welcomed the show back into the entertainment arena.

Securipro's managing director Winston Barnes also welcomed back Startime and assured the gathering, and Startime patrons by extension, of well laid-out security plans for the concert venue and the LIME Golf Academy, which will be utilised for free parking.

KOOL 97 FM's programmes manager Clordene Lloyd said that, as purveyors of quality music, her station is excited to renew its involvement with Startime. She said KOOL is happy to be able to continue to support a show which has done so much to expose the music and artistes who played such an important pioneering role in the development of Jamaica's entertainment industry.

MKB directors Michael Barnett and Keith Brown both gave enjoyable insights into the show's history, from its earliest days at the Oceana Hotel to its growth into being an internationally acclaimed event. "Startime, despite its success, had experienced some tough times. But the love, passion and demand for the event which was so willingly and openly expressed by the public had made its return non-debatable," said Barnett.

There was a surprise presentation of a specially commissioned 'Show Me the Wray' painting to Wray & Nephew's Cecil Smith by well-known artist Andy Ballentine.