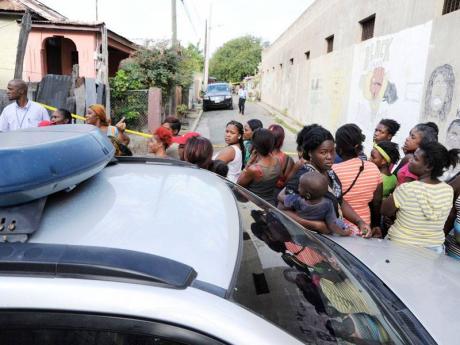 Residents look on at the scene where four-year-old Rushaun Burford was shot in the head early yesterday morning at a yard located on Lord Elgin Street in Allman Town, central Kingston. - photos by Ricardo Makyn/Staff Photographer

The now all-too-familiar wail of a mother over the death of her child echoed in Allman Town, central Kingston, yesterday as Trudy-Ann Brown mourned the shooting of her only son, four-year-old Rushaun Burford.

Several other mothers added their cries to that of Brown as they lamented yet another killing of a Jamaican child, the second in less than 24 hours. Children cried, teachers cried, seasoned policemen cried, neighbours cried and even journalists struggled to hold back the tears as they looked at the body of little Rushaun, better known as 'Rajay'.

"A nuh my child but me feel it. How him mother a guh tek this? We need Jesus in this country!" shouted one woman as tears streamed down her face.

"This is the worst that I have ever seen," said member of parliament for the area, Education Minister Ronald Thwaites.

"I covered my face to hide the tears after looking at the body. I'm devastated and I wonder what kind of animal could have done this," added Thwaites.

He visited the neighbouring Allman Town Primary School where students could stand on the upstairs balcony and look down at the body of one younger than them.

"You could see the blank faces of the children; some of them passed the body on their way to school," Thwaites told The Gleaner.

There were no classes at the nearby Salvation Army Basic School where Rushaun was a pupil.

Only three of the 38 students were in the building as Rushaun's class teacher, the principal and the school's administrator struggled to deal with the tragedy.

"He was a funny little boy, active and lovely," said Stephaine Cooke, the principal.

"He was a quiet, hard-working child who did his work very well," added his class teacher, Angela Nelson.

Rushaun was shot by a lone gunman shortly after 7 yesterday morning.

The police have since identified the shooter as Marlon McMillan, otherwise called 'Shooty'.

McMillan is being asked to report to police personnel at the Kingston Central Police Station.

According to the reports of residents, McMillan and some members of Rushaun's family had a dispute on Wednesday about a blocked manhole close to the premises they shared at 3 Lord Elgin Road in Allman Town.

The police were called in and the parties counselled, supposedly putting an end to the dispute.

But yesterday morning, an angry McMillan left the premises and allegedly warned that he was "going for his gun".

With Rushaun's mother off to work, his 43-year-old grandmother, Lorna McKenzie, was left to take care of him.

It is reported that McKenzie and Rushaun were leaving the premises when they encountered McMillan who immediately opened fire.

Rushaun was shot in the face and died on the spot while his grandmother was hit in the right thigh.

She was taken to hospital long after the shooting as, in her grief over Rushaun's death, she was not aware that she had been shot.

Rushaun's mother, who had left for work shortly after 5 yesterday morning, was completely distraught when she returned home and pushed past the crime scene tape to look at the body of her only child lying on the street.

The shooting of Rushaun came less than 24 hours after Haile Selassie High School student, 14-year-old Shariefa Saddler, was abducted and murdered in the Corporate Area.