NO PERMIT, NO TRADE 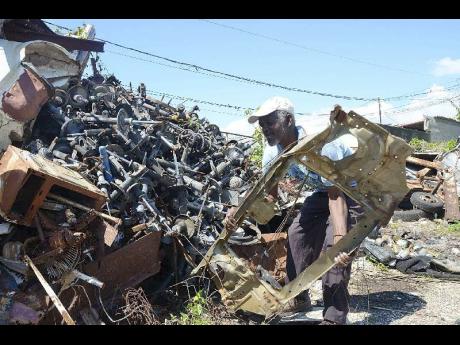 A worker at a scrap metal site in Sandy Bay, Clarendon, gets to work on Sunday, January 27. - Ian Allen/Photographer

Amid all the concerns, the minister of industry and commerce has delivered on his campaign promise and has reopened the scrap metal trade.

For Anthony Hylton, the member of parliament for Western St Andrew, where the Riverton landfill and dump site is located, this is a good move for some of his constituents because the trade has the potential of generating major revenue for the Government and, of course, at least 14,000 jobs. With an export value which reached as high as US$100 million, it was still a healthy US$30 million in 2011.

On the face of it, the idea of gathering and exporting 'old bruck' which clutters the landscape after outliving its usefulness is appealing, and the temptation is to extend the analysis to decadent politicians who haven't had a good new idea since Pearnel Charles had mostly black hair and my dear friend, who shall remain nameless, weighed just under 200 pounds.

Still, with the thievery associated with the trade in the past, there is justification for trepidation from the average citizen. Indeed, there is the allegation that Charles lost several metal chairs and other pieces of furniture and, apparently, his credibility to the scoundrels because his adversaries in Parliament have cast doubt on the veracity of his claim.

According to their information, there was no report to the police. Nonetheless, Charles also recalled that: "Two years ago, they came with a truck and cut up my wife's metal water tank and took it away ... . We bought three dogs ... and they killed one and stole the other two. They chopped off the head of a Doberman." One may make light of Charles, and think that he is speaking from his white side. However, when he is speaking out of his black side, we ought to listen.

The fact is, many of us have lost heavily to
thieves. All major utility companies have been burnt hard and the impact
of the unconscientious villains might be as much as US$12 million.
Indeed, like Charles, I lost a fully serviceable air-conditioning unit,
used but useful car parts, and a large pot which my mother, only by
reading this column, knows was robbed from me. While the other objects
can be replaced, the sentimental gift from her is
priceless.

The loss of these items from within the
confines of my padlocked yard left me feeling violated and insecure.
Worse, a friend was about to sell me a female Rottweiler. However, given
Charles' experience, they would have probably stolen the bitch,
too.

This is the hard question for Hylton and others
to answer. How will Government minimise and deter the metal pirates who
raid business places and dwellings? The raft of regulations and
initiatives by the Government is commendable. These include posting of
customs and police personnel at each site, while having the items on
display for five days and 100 per cent inspection of all intended
exports. The trade is now a big man's game, and only three accredited
sites are approved as repositories for export. Each exporter will have
to post a $7-million bond with the Factories Corporation of
Jamaica.

All exporters have to be recommended by no
less than a superintendent of police, and everyone who transports metal,
even Blacka and Bongo who push the grass cart, have to be registered
with the trade board. Add to that a fine of $2 million for breaches and,
on the surface, it looks like there is
deterrence.

However, it is difficult to imagine how
all this will be policed. If one has some old grilles, metal gates and
angle irons from domestic modification, for example, will he break the
law if he takes it in his own pickup to the Riverton City
site?

Yet, even if the industry manages to get all of
this right, the major problem is with the environment. Watchdog, the
Jamaica Environment Trust (JET), an independent agency over which the
Government does not have undue influence, quickly showed the State's
petticoat, noting that the requisite environmental permits have not been
obtained.

Despite Hylton's statement that "we have no
intention to breach any law or policy and we commit to adhering fully
to the requirements and conditions from NEPA," this is a serious issue.
JET informed that under the Natural Resources (Prescribed Areas)
(Prohibition of Categories of Enterprises, Construction and Development)
(Amendment) Order 2003, no application was submitted to the National
Environment and Planning Agency (NEPA). While the minister assures the
public that the permits will be sought, it cannot be assumed that they
will be granted.

Thus, despite Hylton's assurance, any
continuation of the trade without the statutory permit, which up to the
time of writing was not granted, is, in fact, unlawful. So, correct me,
lawyers, and the minister is one, doesn't a continuation of the
announced start-up of the trade on Monday last, constitute a breach of
statute? Shouldn't the proper action be to simply obey the law and stop
operations immediately?

There is no God-given right to
an environmental permit from NEPA, although politicians have acted as
if it were so. Suppose the agency discovers that there are
insurmountable breaches which cannot be reconciled at the site(s). Would
the minister direct them to proceed nonetheless?

A
few years ago, NEPA revealed that around 50 per cent of all applications
which it rejected were subsequently reinstated and approved by the
political directorate. Can we trust the minister and crew to do
otherwise? Indeed, the environmental problems with the Riverton City
dump are legendary, and the number of respiratory and other diseases
associated with it is documented.

Going deeper into
the past, there is little to recommend or inspire confidence. Despite
the Government now having a Ministry of the Environment and Climate
Change, the concrete deliverables are not known. Indeed, there are
housing developments which were approved in river courses or flood
plains, communities which were built in prime crocodile habitat with
little care for the fact that the reptiles could climb on people's
verandahs and kill dogs and children and maybe even steal metal objects.
One major hotel was built in a place from which at least six of the
creatures were removed.

It should be noted that in
this country, more than two per cent of forest cover was lost annually
between 1990 and 2007. From 345,000 hectares in 1990, this fell to
339,000 hectares by 2005. This is unimpressive and would have been worse
if the conservator of forests and her hard-working team not done yeoman
service.

Similarly, permits were granted for the mega
hotels which block out large chunks of the north and west coasts. Coral
reef degradation was a grave environmental issue in the early 2000s -
and still is. Apart from the impact of ambient temperature and
hurricanes, the improper disposal of human-generated effluent has led to
algal formations and worsened the crisis. Many of the current problems
we have regarding flooding, contamination of groundwater, toxification
of Kingston Harbour, and myriad others are man-made. At present, more
than 10 per cent of native animals are threatened with
extinction.

In short, our governments do not have a
good track record in protecting the
environment.

Therefore, while we await the full
restart of the trade with Ventolin-enhanced bated breath, we have to
keep both eyes open: one for the crooks and bandits, and the other on
the Government.