It's Christian! - Ardenne student wins battle of the Bee 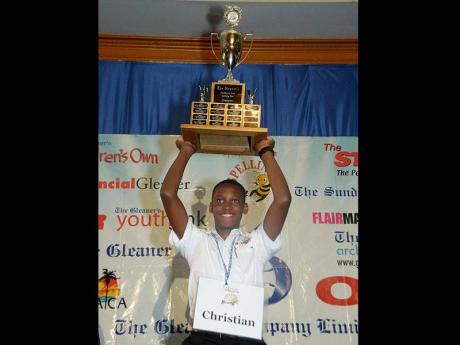 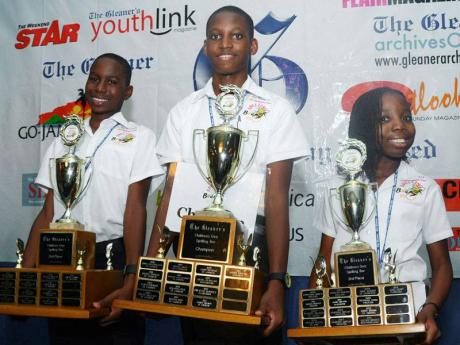 When the bell rang signifying that Clarendon champion Stephen Nelson had missed a-c-c-o-u-c-h-e-u-r, the word that would have given him The Gleaner's Children's Own all-island Spelling Bee title yesterday, eventual winner Christian Allen breathed a huge sigh. He was still in it.

"I thought, 'Oh, I'm going to lose right now'," said a relieved Allen. "I just had to pray and hope that I could still win some way. My prayers were answered."

Allen, the St Andrew champion, was nervous when he missed b-a-r-g-h-e-s-t, ending the number of handicaps he had in the final round. Because Nelson had one handicap left, he only needed one word to be crowned in glory. But it wasn't to be.

After Nelson missed d-i-e-r-v-i-l-l-a, Allen got that one and was given h-i-e-r-u-r-g-y, an act or rite of worship. Allen wouldn't tempt fate any further.

"I do feel sorry for him, but I feel very happy on the inside that I made use of my opportunity," said Allen. Nelson, a crowd favourite, was inconsolable, though a smile emerged slowly after it was revealed he got the top prize in the comprehension and dictation tests. Still teary-eyed, he looked at the positives.

"Spelling has enlarged my vocabulary and the programme I'm in really teaches discipline and all the things you need to become a worthwhile citizen in this country," he said.

Nelson said he would be assisting coach the Reverend Glen Archer, who trained the top three students, to coach younger spellers. Allen will now compete in the Scripps National Spelling Bee in Washington, DC, from May 28 to 30.

Even from the semi-final stage yesterday morning, the tension was palpable inside The Jamaica Pegasus hotel in New Kingston. The round had more than 224 words and for every word - like b-r-a-g-g-a-d-o-c-c-i-o and e-l-e-c-t-r-o-e-n-c-e-p-h-a-l-o-g-r-a-p-h - the spellers got, the audience held its collective breath. Seconds felt like days as the children picked their way through the words like soldiers in a minefield. Success was met with sighs of relief and applause; the tinkle of the bell an indication they erred.

The final round only made the nerves worse as for the first time in recent history, there was a final nine - not seven. After tallying the written tests from Tuesday and the semi-final errors, the judges just could not separate only seven. To underline the close contest, all spellers had two handicaps. There was good crowd support for spellers from the western parishes, hopes rising of the all-island title leaving the Corporate Area. But Joanna Turner of Hanover (fifth) and Abigail Williams of Westmoreland (fourth) fell out after negotiating some gargantuan words. That left champion girl Chaunte Blackwood of Kingston to battle with the boys before finishing a gallant third.

Meaning: An act or rite of worship.