$1 million a day down the drain 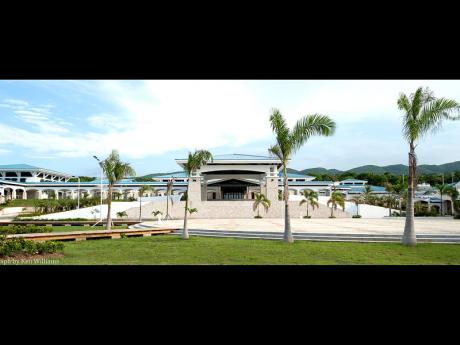 The Montego Bay Convention Centre, constructed at a cost of US$51.7 million and branded as a major outlet to garner foreign exchange from the lucrative meetings and conventions market, is instead bleeding the public purse.

The Sunday Gleaner has confirmed that the centre is costing the country approximately $1 million each day and earning significantly less.

Local stakeholders had predicted that the convention centre had the capacity to generate approximately US$10 million in its first year, with the prospect of a 10 per cent increase in earning each succeeding year.

However, the expected revenue stream has not materialised, leaving the Urban Development Corporation (UDC) with a whopping $30 million per month maintenance cost.

Last week, Shalman Scott, a UDC director and chairman of the convention centre advisory committee, was unwilling to comment on the issue and referred The Sunday Gleaner to the UDC's head office in Kingston, where General Manager Desmond Malcolm provided some details.

"In terms of the revenues from its operation, this is falling very, very short of its operating expenses," said Malcolm.

"It was felt that the convention centre was going to be supported by funds from tourism and that it would spur growth in the sector, but the UDC has had to stand all the costs," Malcolm noted.

Malcolm, who joined the UDC staff six months ago, said a huge chunk of the monthly expenditure goes into the high energy cost, which is to be blamed on the design of the facility.

According to Malcolm, the convention centre has one main switch controlling the air-conditioning unit while it was recently discovered that it has a massive water leakage problem.

Malcolm also confirmed that for the past two years, the centre has spent more than US$50,000 on the rental of utensils to include cutlery.

"This is something I am looking at right now," said Malcolm. "While renting can be cost-saving, renting for two years is ridiculous and this will have to cease."

Another expense Malcolm thinks the centre could do without is an arrangement with a US-based agent, who is contracted to market the facility at a cost of US$80,000 annually.

However, to date, only US$4,000 in income has been generated from that contract.

"One has to benchmark it with salaries in the United States, but when you consider value for money, it is another matter," said Malcolm.

"However, I inherited a contract that I don't think was in the best interest of the UDC and the Government, but it is something we have to live with."

According to the International Congress and Conventions Association, some 400,000 conventions and exhibitions are organised worldwide, annually, at an outlay of US$280 billion.

International researchers have valued the economic impact of the convention-and-meeting industry at US$122.3 billion.

Davon Crump, president of the Montego Bay Chamber of Commerce and Industry, who had a strong voice in the lobbying for the construction of the centre, said the business community is concerned that it is yet to see any tangible benefits from the centre.

"It is a cause for concern as we are not seeing the conventions coming," said Crump.

"The lead time before a company books a convention is, like, two years, so we should have had extensive marketing before the centre was opened.

"However, we hope that this is not made into a political issue, but that there is an immediate review to determine the way forward," added Crump,

"It is now time to focus on making Jamaica the place to go for conventions and major events."

Prominent Montego Bay businessman Robert Russell, a director of the previous UDC board, told The Sunday Gleaner that the marketing plan was for a multi-agency approach, which would see the Jamaica Tourist Board (JTB), and the UDC working with SMG Worldwide Entertainment and Convention Venue Management Company, which has a seven-year contract valued at US$2.4 million "to ensure a continuous flow of conventions to the centre".

"I am not aware of a multi-agency approach with the SMG; what I do know is that the intention was to have an international marketing company to do the marketing and SMG was selected ... not only to market the centre, but to provide management services," said Malcolm.

According to data from the UDC, the Montego Bay Convention Centre has hosted some 187 events since it opened for business in 2011.

However, 99 per cent of the events were generated locally, with the facility utilised for only 279 days in the past 16 months.

While agreeing that more could be done to market the convention centre, former Tourism Minister Edmund Bartlett argued that, globally, such offerings are not a moneymaking operation.

"In essence, a convention centre is like a catalyst which enables the growth of other sectors connected to it," said Bartlett.

"In fact, there are very few places in the world where convention centres are profitable. However, it (Montego Bay Convention Centre) should be able to take care of its operational cost," added Bartlett.