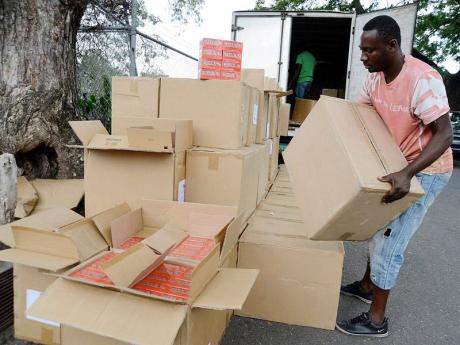 Approximately $12 million worth of Rizla is seized from a truck at an apartment complex on Constant Spring Road in St Andrew yesterday. - Rudolph Brown/Photographer

Commissioner of Customs Major Richard Reese has indicated that investigations are to be carried out to determine whether there were breaches of the Customs Act, following the seizure of approximately $12.2 million worth of Rizla (wrapping paper) yesterday at an apartment complex on Constant Spring Road in St Andrew.

The operation was carried out by the St Andrew North police and a Customs Contraband Enforcement Team about 9 a.m.

The team of police and Customs personnel searched a Toyota Dyna 400 motor truck that had been under surveillance as it was parked in the complex for three days. More than 100 boxes of the wrapping papers were seized.

"People have been living at premises such as apartments and storing goods in vehicles with fake or no licence plates, so we have been doing surveillance on those vehicles," Reese told The Gleaner.

No arrests were made, however, as the truck also possessed a fraudulent licence plate. Investigations are being carried out.

"If we locate the owner then the person would have to produce information to substantiate where the items came from and the duties that were paid," he said. "It is possible that they could have been smuggled in small quantities in various shipments, concealed among other items and brought to a central holding point."