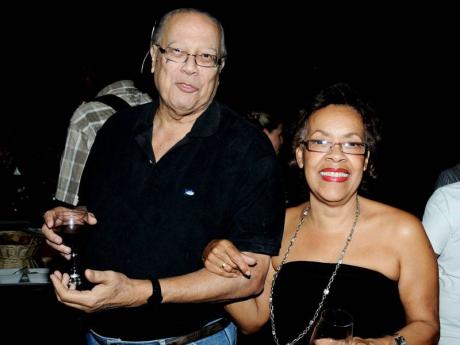 Our camera seems to have surprised Peter Rousseau and his wife Beverley. - Winston Sill/Freelance Photographer 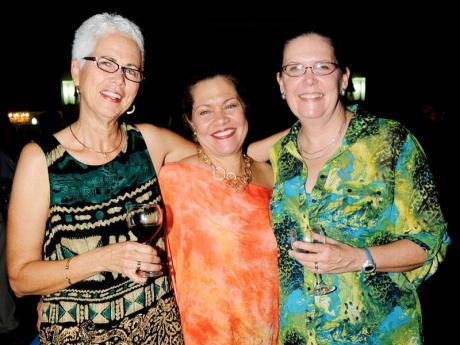 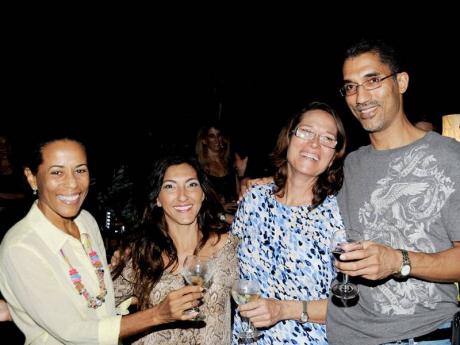 Luvs, It's been a long time coming, but after the many hiccups and false starts, it is now safe to say that Kingston is definitely 'Wine Country'!

Mind you, like all overnight success stories, this one has been more than 20 years in the making. Along the way, there were many who passed themselves off as sages, while others with a little knowledge corrupted the innocent - which is still happening today. But lest we forget, let's commend the late Tom Finnigan for his love of wine and the untiring work he did in demystifying the art of wine drinking and appreciation. Also the indefatigable Judith Douglas of J. Wray & Nephew Limited, for her years of not only promoting and encouraging the appreciation and consumption of wine, but the knowledge of wine.

Long before it was fashionable, Douglas was at the forefront, bringing her knowledge to the people of Jamaica, particularly Kingstonians, who have been demonstrating a growing and voracious appetite for the vino!

Mind you, the protocol of wine drinking and appreciation is changing, and so, what was once regarded as 'gospel' in the wine industry is now being revisited, and in recent years, a 'new testament' has been emerging. After all, wine was made for man, not man for the wine - a point many who go around trotting out old dogma in matters of food and wine will be better served to absorb!

Anyways, my dears, with Kingston sealing its cosmopolitan status as 'wine country', over the years a number of wine bars, merchants and foodie outlets have sprung up, spreading the gospel of wine. They have made the product and its fabulous accessories not just more accessible, but also more customer friendly.

One such establishment has been the charmingly intimately fab Uncorked.

Luvs, in its first year of operation, the fabulous establishment operated as a wine and accessories boutique and café offering the finest in wines, cheeses, and all that goes into enhancing the wine-drinking experience.

And dears, when we say accessories here, we are talking anything from cheeses, crackers, baguettes, foie gras, to wine openers and stoppers.

Uncorked started out as a little venture operated by a trio of friends at the smart Golden Triangle address on Hilcrest Avenue.

Well, to celebrate their second anniversary, as well as accommodating the needs of their expanding clientele, the boutique operation moved to new Sovereign North at 29 Barbican Road, making that neck of the woods easily one of the city's fastest-growing restaurant rows. The original trio who started on Hilcrest have also now become a duo.

Well, my dears, in launching their new locale, the existing partners - the charming Debra Valentine and the equally charming Anna-Kay von Dueszeln - threw a 'little' wine party. And dears, it proved the oenophile's party of the season and then some!

To begin with, the new Uncorked has not only retained, but has enhanced its trendsetting charm, as Sovereign North is proving ultra-chic with nothing but fabulous businesses in the well-regulated and secured shopping and business mecca.

Here, there's far more parking facilities, and outdoor café-style seating, plus the benefits of the air-conditioned inner sanctum, with a wider range of display options. But, for this here scribe, the continuing beauty of Uncorked is the knowledge-based, personalised service provided by its proprietors and staff. That sets them apart from pretenders - no grandstanding here, just people at ease with themselves and, as such, providing excellent service and repartée, that makes for the perfect atmosphere.

So with the original atmosphere retained, it made for a simply charming do.

And dears, charming it was and then some, as wine society was out in celebratory mode and numbers, with the management and staff putting on the ritz of a fabulous performance, you know we are talking social prime time here and nothing but!

Dears, talk about 'A-crowd', well, it was that kind of an event and then some, with the fab and famous from across the island out, sharing each other's society and the vino being poured. And dears, there was a lot of vino being poured.

And come this weekend, the grande dame of the runway, former cover girl and star of the catwalk Althea Laing, is all set to return to the industry, as she gets set to stage her Teen Empowerment Workshop. The two-day event, which starts today at the trendy South Beach Café in New Kingston, will cover such topics as: the art of poise, posture, communication, social graces, etiquette, and wardrobe and accessorising.

The symposiums, being offered by popular demand, and with courses also slated for the summer, are designed to assist today's youth struggling with identity and cultural misidentification, to assert themselves in an increasingly competitive social environment.

More anon here, as this is indeed a positive intervention.