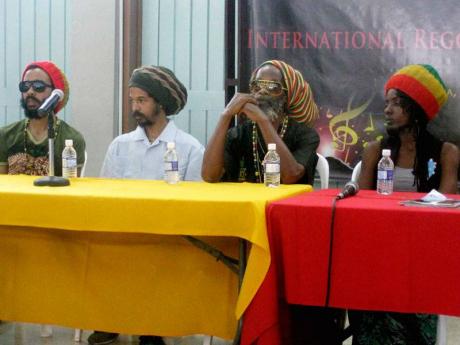 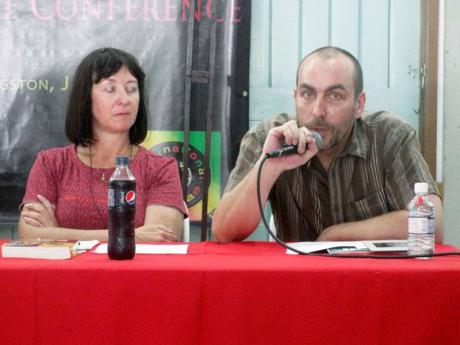 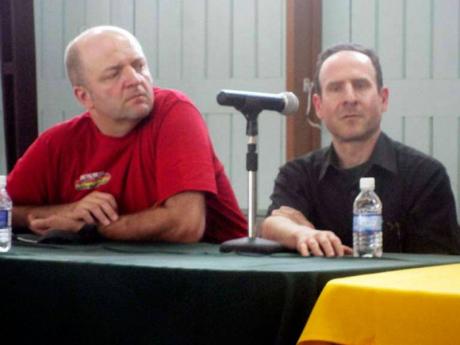 Pete Lilly of the Germany-based Riddim Magazine started Saturday afternoon's Rototom Reggae University panel of the 2013 International Reggae Conference by noting the gap in perspectives on reggae from where he lives and where the music form was born.

For a while, one prominent Jamaican selector had complained he could not get good reggae music from Jamaica and had to look to Europe for that, Lilly said "we have never been more excited about the developments" which have been termed "the reggae revival".

So the panel duly examined this purported revival, with forthright guitarist Earl 'Chinna' Smith making it clear that "reggae never dead". He was one of four guests on the panel, the other three being Protoje, Jah9 and Dutty Bookman. Lilly's Riddim colleague Ellen Koehlings, David Katz and Pier Tosi were part of the discussion, in which they put questions to the guests who gave extended responses.

Smith pointed out a huge difference in impact between someone like Eric Donaldson, who "come with Cherry Oh Baby and mash up the world" and some currently hot artistes who are on magazine covers but making little impact. "What music is today is a magazine thing," Smith said.

Jah9's New Name from her upcoming debut album, to be released later this month, was played to indicate the high quality of reggae being produced now. Responding to Koehlings' question about her path to reggae and working with Smith, Jah9 described Chinna's Inna De Yard base as "a meeting point where the elders share the knowledge with the new generation".

She pointed out that she came to reggae through Rastafari and described going to Inna De Yard for about a year before interacting with Smith. That changed when Uprising Roots bassist Pot A Rice was playing along with Smith one day and invited her to sing, which resulted in an extended session.

And she identified a connection between the music of the elders and now. "It is one current from then till now. The revival is not so much the music coming back, but Rastafari youth being able to stand up with courage and say Haile Selassie is the almighty and no one can kick out your teeth and pull out your hair," she said.

Responding to Katz, Smith noted how he had pulled out of touring because of how the artistes' attitude had changed. "When I go out there is not the exodus, is not the movement of Jah people... is a money thing," Chin said. So he played his guitar at home every day and eventually some people asked if they could record him like that and he decided he would, if he could do it in the same relaxed setting. "Another man do a tune," he said, and it developed from there.

Protoje's Reggae Revival (with guest Romain Virgo) from the Eight Year Itch album, which was released last week, was played before Protoje outlined how persons of his generation have had to search for reggae, which was sparse on radio and stage shows when they were growing up. He described how the live scene, which has been crucial to the increased reggae visibility, grew from 20 people to 50 to 500 and more.

"Reggae cannot die. The positivity will never die. Now we see the interest of a 13- year-old coming to a reggae show," Protoje said. "They come to Jamnesia, Inna De Yard to reconnect with the culture."

Tosi spoke to author Dutty Bookman as the person who coined the phrase 'reggae revival', Bookman giving the context of his introduction to Rastafari livity through working with the Bob Marley Foundation. He studied the Harlem Renaissance and realised "I could learn so much about a time and place, packaged in a name".

Having been introduced to Jah9, No-Maddz, Raging Fyah and other artistes through his connection with Protoje, Bookman became immersed in the surge of artistes and realised he was "the only person capable of writing about it".

"I thought my contribution to this thing happening now was to give it a name," he said. Jamaican Renaissance would not do and he noted how performers like Raging Fyah were making it cool to listen to reggae again. "This coolness that is happening now is what I am referring to as the reggae revival," Bookman said. "It is up to us now, when they come, to show them the free spaces, the free-thinking spaces."

Lilly noted that it is not only musical performers, but photographers, film directors and visual artists, among other creative persons and asked if there is a common goal. Jah9 said: "The time of one artiste rising and shining over everybody, we may not have that again." And in terms of the collective output, she said it is not about how much money will be made, it is a matter of expression because one is full to the brim.

And, Protoje emphasised: "It is not the time for individual glory. It is about nation-building."

Koehlings put an emphatic end on the discussion, that "reggae music is alive and well".

From left: Protoje, Dutty Bookman, Earl 'Chinna' Smith and Jah9 at the Rototom Reggae University panel on Saturday afternoon. The panel was part of the 2013 International Reggae Conference, held on the Mona campus of the University of the West Indies.