Prepaid power? - Gov't flirts with possibility of buying electricity before actual use 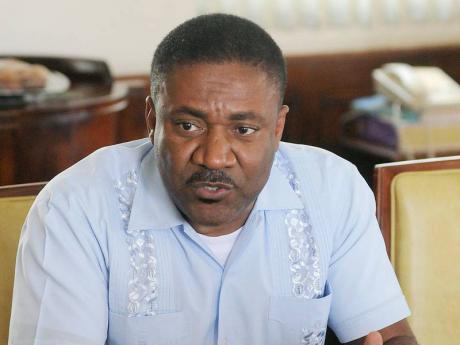 In the article "Prepaid power?' the sub-headline incorrectly stated that 'Gov't flirts with possibility of buying electricity before actual use'.

The potential customers for the prepaid power, a project which is now udner consideration by the Jamaica Public Service Company, are the other customer of the light and power company.

We regret the error.

The prospect of buying prepaid electricity may soon become a reality if a pilot project which is currently being undertaken proves feasible, Energy Minister Phillip Paulwell told the House of Representatives yesterday.

At the same time, the Government has removed GCT from the purchase of 31 energy-saving devices for renewable energy and energy efficiency.

The Government has also suspended the Common External Tariff (CET) on some 16 energy-saving items.

In making the announcement in the House of Representatives, Paulwell said the initiatives are intended to result in a lowering of the country's oil-import bill, improve the competitiveness of manufacturers and increase energy efficiency on the island.

The pending introduction of prepaid electricity, Paulwell said, is among seven new systems being considered by the Jamaica Public Service (JPS) as it seeks to improve billing, collections and customer service.

"Given our experience in the telecoms sector, I anticipate that on national roll-out, it will be a resounding success," Paulwell said.

The minister also announced that the JPS will no longer automatically disconnect customers who miss their bill payment date by up to a week, but will slap those customers with a late fine of $250.

Paulwell said the change has resulted from negotiations with the light and power company.

In the meantime, Paulwell told the House that the JPS has agreed to offer a $250 discount as an incentive to customers who pay their bills before the due date.

"This will help the company improve its collections, and will allow those of us who like to be early to derive some benefits for being proactive," Paulwell said.

Paulwell also announced the reduction of electricity rates which will benefit the manufacturing and productive sectors.

The rate reduction relates to wholesale rates, which represents 20 per cent of JPS's revenue, will come by way of 25 per cent discount on the non-fuel tariff.

"The JPS has agreed to adjust the time of discount they offer commercial and industrial customers for their off-peak usage. These measures will greatly ease the burden on the production and manufacturing sectors," Paulwell said.

As the minister read out the range of adjustments to come on stream, West St Thomas MP James Robertson shouted: "Rubbish! You're tinkering!"

Robertson, a former energy minister, in a sotto voce comment, said Paulwell should tell the Parliament what is being done to achieve the 40 per cent reduction in electricity, which he has promised.

Meanwhile, Gregory Mair, the opposition spokesman on energy, who rose to speak, welcomed the announcement but said that non-fuel charge is approximately 40 per cent of the cost. He argued that the savings to the consumers would be only 10 per cent.''

He also congratulated the minister on negotiating with the JPS a new disconnection policy.

"It is so interesting, the minister and JPS used to be at loggerheads now they are in love and they are having a good time together."

The Office of Utilities Regulation has to endorse the measures, which Paulwell says he expects to be implemented by July 1.

In announcing the suspension of the Common External Tariff on some 16 energy-saving items, Paulwell said: "I am pleased to report that at its meeting yesterday, Cabinet approved an amendment to the Customs Act to reflect CET exemptions that had previously been granted by CARICOM's Council of Trade and Economic Development for a period of five years from January 1, 2013 to December 31, 2017."

Among the items to be exempted from CET are compact fluorescent lamps, absorption refrigeration systems, including equipment and materials using solar, air-conditioning chillers, and mounting accessories for solar water heating systems.

As it relates to GCT exemptions, persons will no longer pay the tax on items such as solar cells designed to produce electricity from the sun, solar panels and tubes for solar water-heating systems, solar street and walkway lamps, solar electric fans, lighting control units and solar-electric refrigerators.

"This Government intends to take the necessary measures to ensure that by 2030 renewable energy technologies contribute to at least 30 per cent of the country's electricity needs," Paulwell said.

He added: "This may at first blush appear to be an ambitious target, but we feel that especially given the unpredictability of the energy market and the development of new technologies, this is highly achievable."

Mair, meanwhile, has called for the Government to remove the CET from petroleum products, to include heavy fuel oil.