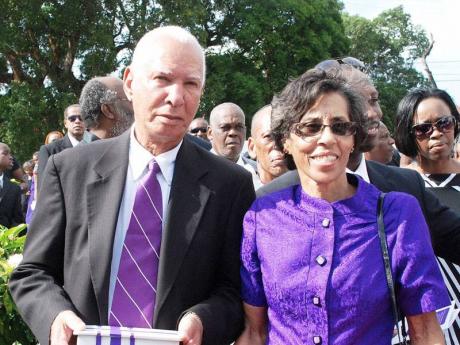 Audley Hewett (left), former president of the JAAA, carries the remains of the late Teddy McCook while his widow, Sonia, carries an award he received from the IAAF at a thanksgiving service. The service was held at the Kingston College chapel in Kingston yesterday. - Colin Hamilton Freelance/Photographer

THERE WAS a large presence of local and overseas dignitaries at yesterday's service of thanksgiving for Neville Maurice 'Teddy' McCook, former president of the North America, Central America and Caribbean Area, which was held at the St Augustine Chapel on the grounds of Kingston College.

McCook's former schoolmate, the Reverend Don Taylor, former principal of Kingston College and the Rectory of the Kingston Parish Church, delivered the homily.

Taylor said McCook had touched many lives in positive ways.

"The most significant thing to happen today is that Teddy wanted his burial service to be right here in this chapel, as he always wanted to come back because most of his life unfolded right in this place as a student," said Taylor.

"People would like to ask why this chapel, as Teddy (McCook) could have had his burial service anywhere, but this has always been a special place for old boys of this institution, and this was the place he wanted to be," continued Taylor. He added: "Teddy was a very noble man and always wanted to transform the life of every Jamaican, and we all extend love to all his family members," he said.

McCook, who is also a former president of the Jamaica Athletics Administrative Association, died on February 11 at The Tony Thwaites Wing at the University Hospital of the West Indies after a prolonged illness. He was 73.

He was bestowed with the highest award from the International Association of Athletics Federations (IAAF) - the Gold Order of Merit.