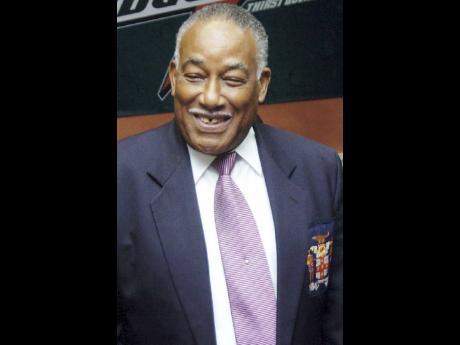 Bob Hersh, a vice-president of the IAAF, bestowed the award on the late McCook at yesterday's service of thanksgiving, held at the St Augustine's Kingston Chapel, which is located on the premises of his alma mater, Kingston College.

"I feel honoured to confer this on someone so noble as McCook," said Hersh.

Former principal of Kingston College and Rector of the Kingston Parish Church, Don Taylor, who delivered the homily in honour of McCook, said his former schoolmate was 'someone special' and touched many lives positively.

"Teddy (McCook) was indeed someone special and he helped to transform the lives of others and he lived his life well," said Taylor.

He said McCook always told him the most important things he wanted was to have his funeral service at Kingston College chapel.

"To be buried from the Kingston Chapel was the most significant thing for him as he wanted to come back because most of his life unfolded inside that chapel," continued Taylor.

"Like all Kingston College Old Boys, the chapel was a very important part in their lives and he could have his burial service anywhere, but he opted for the chapel which he thinks was somewhere special in his life," Taylor shared.

"I feel privileged to be here in delivering a letter on behalf of my Federation and people of The Bahamas to the family of McCook," said Davis.