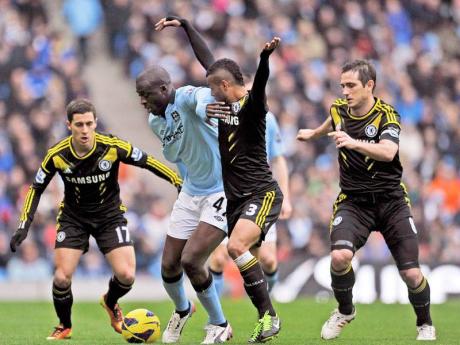 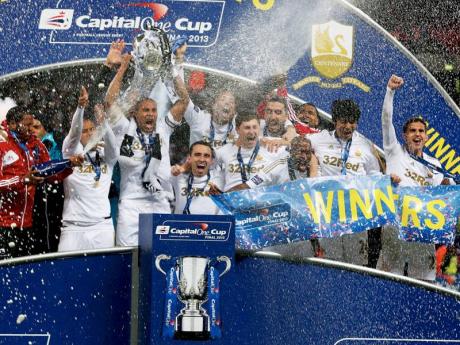 Swansea denied Bradford the perfect end to their fairytale run in the League Cup by thrashing the fourth-tier club 5-0 in the final, capping their centenary season with a first major trophy.

Manchester City haven't given up on winning silverware this year, either, after reviving their faint Premier League title hopes with a 2-0 win over Chelsea. The champions stayed 12 points behind Manchester United.

City needed second-half goals by Yaya Toure and Carlos Tevez to wear down the European champions.

City produced one of their most assured and convincing displays of the season to issue a reminder to United that the fight for the title remains on.

"We can't think it's finished with 11 games to go," City manager Roberto Mancini said. "It's not my mentality or the mentality of the players."

Toure opened the scoring with a classy finish in the 63rd minute and Tevez came off the bench to smash in the second in the 85th.

Outclassed for the most part, it could have been so different for Chelsea had Frank Lampard's low penalty not been saved by Joe Hart in the 52nd minute after the goalkeeper brought down Demba Ba in one of the visitors' rare attacks.

After missing a chance to move a point behind City, Chelsea could be overtaken today by Tottenham, which visit West Ham. Arsenal are only two points behind Chelsea in the race for the final Champions League spots.

"When you lose you have to be disappointed, and this game was important for us because we could have been closer to Man City," Chelsea manager Rafael Benitez said. "But we cannot give up, we have to carry on, try to win our games and get close."

France internationals Moussa Sissoko and Yohan Cabaye capped Newcastle's self-designated 'French Day' by scoring goals in a 4-2 win over Southampton in the other league match, lifting the team clear of relegation trouble.

Home fans donned berets and black-and-white striped T-shirts in celebration of the club's 10-strong French contingent, seven of whom were in the match-day squad yesterday, but it was one of Southampton's French players - Morgan Schneiderlin - who scored the opening goal.

Sissoko equalised and Papiss Cisse gave Newcastle the lead with a dipping volley, only for Rickie Lambert to level for Southampton with his 12th goal of the campaign.

Cabaye's penalty and Jos Hooiveld's own goal clinched a victory which puts Newcastle six points out of the drop zone and condemned Southampton to only a second loss in 10 matches.

"You look at the Premier League table and we have now put ourselves in a position to attack 10th and that was the importance of the victory today," Newcastle manager Alan Pardew said.

Swansea's victory at Wembley Stadium was never really in doubt from the moment Nathan Dyer scored the 16th-minute opener.

Dyer and Jonathan de Guzman both finished with two goals and Michu grabbed the other in the largest winning margin in the final of English football's second-tier knockout competition. Swansea will play in the Europa League next season.

"The first trophy is always special and next year in Europe will be a nice experience," said Swansea manager Michael Laudrup, the Denmark great.

Bradford were looking to add the Welsh club to a list of Premier League conquests that already included Arsenal, Aston Villa and Wigan in their unprecedented run to the final.

However, the team, currently ranked 79th in English football's league pyramid, was blown away by Swansea's renowned passing game, with goalkeeper Matt Duke's straight red card for tripping De Guzman in the 56th summing up their day.

"The early goal killed us," Duke said. "It is disappointing, but this is a massive plus for the football club, a massive achievement and we have to remember that."

Bradford were the first fourth-tier team to reach a major final since 1962, when the competition was in its second year and the country's major teams didn't take it seriously.

Santi Cazorla scored twice to earn Arsenal earned some respite after a turbulent week. Cazorla powered in a low shot to give the hosts a sixth-minute lead. Arsenal could not make the most of their possession and were punished when poor defending let Andreas Weimann drive in a 22-yard equaliser. But Nacho Monreal cut the ball across for Cazorla to sidefoot in a winner from 12 yards after 85 minutes.

Dimitar Berbatov's immaculate volley was enough to beat Stoke City and earn Fulham just their fourth victory in 19 Barclays Premier League games. Berbatov smashed the ball in from 10 yards to give them a deserved lead deep into first-half injury-time. Stoke wasted a glorious chance to level after the break when Mark Schwarzer saved a Jonathan Walters penalty.

Grant Holt's injury-time goal earned Norwich a first Barclays Premier League win in 10 games as they scored twice in the final six minutes to stun Everton. Everton had led through Leon Osman's close-range header, but Norwich substitute Kei Kamara's towering late header seemed to have rescued a point for the Canaries. But Holt grabbed an unlikely winner when he stabbed the ball in from close range four minutes into added time.

Ryan Giggs scored on his 999th senior appearance for club and country to help lift Manchester United over QPR. The Welshman sealed the win after Rafael's spectacular 20-yard strike had given the visitors a first-half lead. The young Brazilian also showed his worth in defence when he cleared Chris Samba's header off the line. QPR improved after the break, but Giggs timed his run to tuck in with 10 minutes left and later hit the bar.

Two goals by Arouna Kone lifted Wigan Athletic out of the bottom three and increased 10-man Reading's relegation fears at the Madejski Stadium. The Ivory Coast striker opened the scoring when Maynor Figueroa's header hit his chest and flew into the net. Kone made it 2-0 moments later with a sublime finish following Jean Beausejour's defence-splitting pass. Figueroa completed the scoring, before falling victim to a dreadful challenge by Pavel Pogrebnyak, who was sent off.

Romelu Lukaku scored twice as West Bromwich Albion beat Sunderland to keep their hopes of claiming a Europa League place alive. Lukaku's penalty, after a Craig Gardner handball, put the hosts ahead. The Belgium striker doubled his side's lead when Sunderland goalkeeper Simon Mignolet's clearance rebounded off him. Stephane Sessegnon curled home a late consolation, but Albion held on for a deserved win.