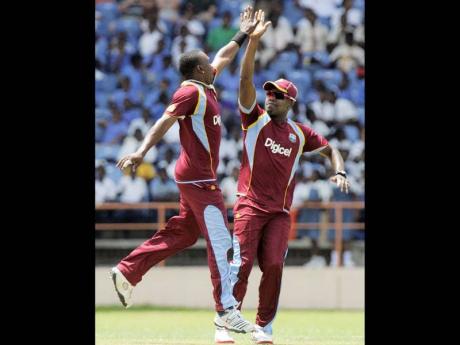 Stylish left-hander Darren Bravo fashioned his second half-century of the tour as West Indies fought off lethargy to beat Zimbabwe by five wickets yesterday and sweep the three-match one-day series.

Chasing an insufficient 212 for victory at the Grenada National Stadium, West Indies stuttered to 121 for four in the 32nd over before steadying themselves to reach their target with 22 balls to spare.

Debutant 22-year-old leg-spinner Tinotenda Mutombodzi impressed with two for 35 from his 10 overs.

He along with Natsai Mushangwe, whose 10 overs of leg-spin yielded just 31 runs, tested West Indies and dried up the scoring until Bravo took control in a series of small partnerships to negate any idea of a Zimbabwe victory.

Earlier, West Indies used an accurate blend of seam and spin to strangle the African side and to limit them to 211 for nine from their 50 overs, after they won the toss and chose to bat.

Chamu Chibhabha struck a defiant 48 off 62 deliveries to shepherd the innings, while the classy Vusi Sibanda scored 41 and captain Brendan Taylor, 39.

The architect of Zimbabwe's demise was left-arm spinner Veerasammy Permaul, who undermined the middle order to finish with three for 40.

West Indies were on top from early after opener Tino Mawoyo (9) and Hamilton Masakadza (6) fell cheaply in the space of four overs, to leave Zimbabwe on 30 for two in the 13th over.

Sibanda and Taylor then combined to repair the damage in a 55-run, third-wicket partnership off 51 deliveries. The right-handed Sibanda stroked three fours and a six off 60 balls, while Taylor produced a brisk 38-ball knock that yielded three fours and two sixes.

Best ended the stand when he had Sibanda caught at mid-off by Narsingh Deonarine off a leading edge at the end of the 21st over.

His dismissal sparked a slide which saw four wickets fall for 54 runs as Permaul prised out Taylor, the dangerous Malcolm Waller for 15 lbw on review and Regis Chakabva, bowled for 17.

Chibhabha, however, held the innings together in a knock that contained three fours and two sixes - the last of which was terrific blow off the last ball of the innings bowled by Bravo.

Requiring just over four an over to win the contest, there was little urgency from Powell and Ramnaresh Sarwan as they put on 44 from 69 balls for the first wicket.

While Powell faced 52 balls and struck five fours, Sarwan spent 42 balls at the crease for his 19 before scooping a return catch to Mutombodzi in the bowler's first over.

Darren Bravo joined Powell to add a further 37 for the second wicket, a partnership that ended when Powell needlessly chanced his arm to long-on off Mutombodzi and found Waller's safe grasp.

West Indies remained in cruise mode, with Bravo and Narsingh Deonarine posting 37 for the third wicket with little fanfare against an attack short of imagination. Bravo faced 103 deliveries and struck five fours while Deonarine, also a left-hander, gathered 21 from 32 balls.

West Indies then stumbled, losing two wickets for one run in the space of three balls. Deonarine lazily chipped medium pacer Masakadza to Mutombodzi at midwicket in the 31st over and Kieron Pollard was run out without facing a ball when Bravo turned his back on a second run.

However, Darren Bravo paired with his older brother Dwayne to add an enterprising 46 from 43 deliveries for the fifth wicket, before joining with Denesh Ramdin (24 not out) to put on 48 for the next wicket, to erase any nerves.

Darren Bravo was named Man of the Match and Player of the Series.