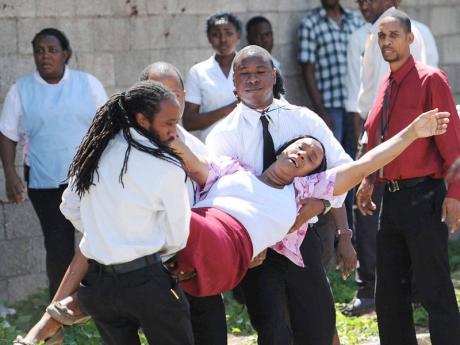 A worker collapses after inhaling toxic fumes that affected the Central Sorting Office. The CSO, schools and other businesses in the vicinity had to be evacuated and the area closed off. - Ricardo Makyn/Staff Photographer 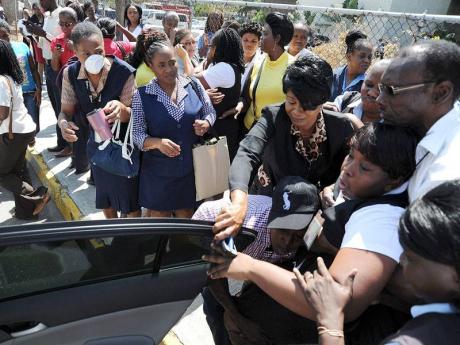 A worker collapses and is being rushed to the hospital after inhaling offensive fumes that affected the Central Sorting Office in Kingston yesterday. - Ricardo Makyn/Staff Photographer 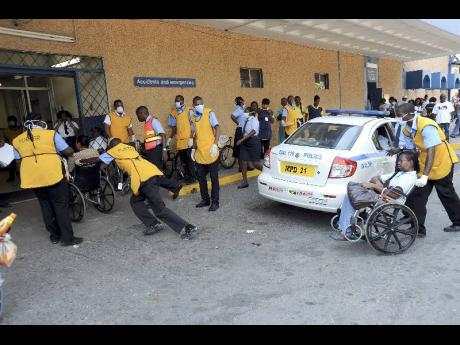 Porters at the Kingston Public Hospital were kept busy as police officers and ambulances transport workers from the Central Sorting Office in Kingston who got sick from toxic fumes that affected the area yesterday. - Norman Grindley/Chief Photographer
1
2
3

A member of the Jamaica Fire Brigade was one of 60 people who were rushed to the Kingston Public Hospital (KPH) yesterday for treatment after ingesting noxious fumes thought to be emanating from the Central Sorting Office (CSO) of the Post and Telecommunications Department in Kingston.

"People dropping like flies," was how one staff member described the scene to his co-worker who turned up in the afternoon for work, only to find the entire area cordoned off and a barrage of emergency personnel on the scene.

"As mi go up and tek out me envelope fi go change di cheque, mi only smell a thing coming from over di cashier and same time mi start sneeze and cough and from dat, mi end up at di hospital," said Llewellyn Johnson, who was one of several pensioners who had to cut their business short yesterday.

When The Gleaner turned up at the office minutes past 10 a.m. yesterday, more than 600 staff members were standing on the outside of the compound after being instructed to evacuate the building.

It was not long after that one woman fainted and was taken away by a waiting ambulance. After that, pandemonium broke out when, one by one, people started fainting.

The Gleaner was told that all ambulance units at the hospital were deployed to the area.

Up to late yesterday, the National Environment and Planning Agency (NEPA) had not ascertained the source of the fumes and was unable to say what type of fume it was. However, The Gleaner was told that it did not emanate from the building.

"We have concluded that it is not inside the building, we have not picked up anything. We are checking see if we can pick up anything in the surrounding community," said Gary Campbell, coordinator of NEPA's air quality management programme focal point.

Responding to complaints from staff members that this was not the first time the building was affected by fumes, Campbell told The Gleaner: "There was a chlorine incident about two years ago. Somebody was cutting a cylinder at a garage behind the building when they accidentally cut a chlorine container and the fume was released."

There were suggestions that the height of the building could have contributed to it being mostly impacted.

Questioned yesterday about how the staff at the KPH handled the influx of persons turning up for treatment, head of the South East Regional Health Authority, Tanny Shirley, said it was mostly smooth sailing.

"The KPH is used to situations like this and they handled it very well today. Fortunately, the patients are not patients that were critically ill, so the movements were relatively calm.

"There was no report of any patients being admitted," he said.

Postmaster General Michael Gentles told The Gleaner that the workday was adversely impacted.

"It has affected us badly; we have had to close down all areas of operations here at CSO and this is the hub of the post office, so it will impact on everything else. Today is a pension day when we are paying our pensioners, so they probably now have to go to another post office," Gentles told The Gleaner.

In a report issued yesterday, the Office of Disaster Preparedness and Emergency Management said that the area was opened to accommodate traffic, but those specialists were still on the scene carrying out their investigations.

"Preliminary investigations from the National Environment and Planning Agency (NEPA) have revealed that the odour has dissipated and the community and the eastern side of the CSO have been cleared. Checks were done for sulphur dioxide, carbon monoxide, nitrogen oxide and organics."

ODPEM Director General Ronald Jackson said from all accounts so far, it should be safe for persons to enter the building today.