Jamaica crash out of CONCACAF U-20 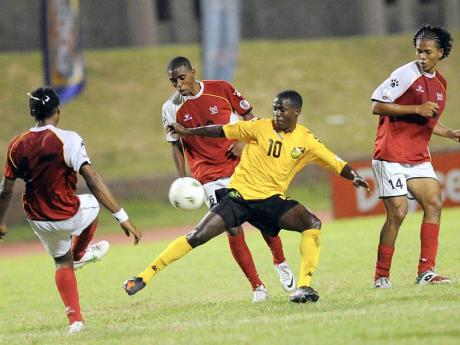 Jamaica's young Reggae Boyz crashed out of the CONCACAF Under-20 Championships on Wednesday night in Puebla following a crushing 4-0 quarter-final defeat by hosts Mexico.

The victory sealed a spot in 2013 FIFA Under-20 World Cup in Turkey for the hosts alongside the United States and first-timers Cuba and El Salvador.

Jamaica were chasing the Wednesday's night's game from as early as the 12th minute when Mexico's Armando Zamorano's long- range shot from outside the area deflected off defender Alvas Powell before wrong-footing goalkeeper Rashaun Patterson.

The Young Reggae Boyz responded well with Powell sturdy in defence and Paul Wilson and Andre Lewis forcing the Mexican defenders to make some hurried clearances.

Just before the break, however, Jamaica found themselves 2-0 down. A cross from the right wing found an unmarked Marco Bruno inside the six-yard box and he easily headed past Patterson.

The Mexicans who passed the ball well throughout the match grabbed their third goal midway the second half. In the 68th minute, wingback Francisco Flores curled a 30-yard free kick out of the reach of goalkeeper Patterson and left him clutching the air at his near post as the ball lodged in the back of the net.

Mexico completed the scoring in the 75th minute from another free kick. Jesus Escoboza sent in the free kick from the right wing and it eluded everyone, including goalkeeper Patterson, before resting inside the far corner.

Jamaica tried hard to pull back a goal and came close in the 79th minute when Omar Holness' free kick from just outside the area slammed into the crossbar and rebounded into play.

The young Reggae Boyz departed the tournament with just one win in three matches, but by being one of the two top-place teams from the Caribbean (the other being Cuba) they qualified for the Central America and Caribbean Games scheduled for Mexico in July 2014.

The semi-finals of the championships will be played today with United States facing meeting Cuba at 6 p.m. before the hosts face El Salvador at 9 p.m. The final will be played on Sunday at 7 p.m.