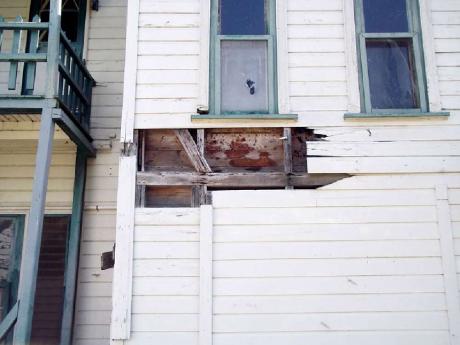 CREAKING FLOORboards, flaking paint, water-damaged ceilings and walls serve as silent witnesses to a roof that needs repair. This has become the fate of the Magdala House in Black River, St Elizabeth, a building of historic and architectural interest.

According to the Jamaica National Heritage Trust, the house was built in the late 19th century. It was constructed by Adolphus Williams for Tom Leyden, who, with partner William Farquharson of Leyden and Farquharson Shipping Company, were two of the richest men in Jamaica in the mid-1880s. The house is a two-storey Victorian building decorated with fretwork.

The building has served varying purposes such as a family dwelling, a convent, and an orphanage. It is now owned by the St Theresa Catholic Church and is located on the church grounds.

The first floor of the building is occupied by students from the church-operated St Theresa Basic School, which is located on the same compound. This, Father Joseph Kimani, said was in an effort to reduce further deterioration of the building.

"We are trying to occupy the building for the time because it has been without any occupants since it was an orphanage and the orphanage moved from here to Mandeville, so it was left vacant. So in order to keep the building good and going on, we put the basic school [students there]."

Father Kimani said vandals and thieves had caused further damage to the building.

He said the church was still in discussion regarding how it would get the building fixed and how it would ensure that it would not again end up in a similar condition once it had been repaired.

While Father Kimani said he was open to the house being turned into a craft shop or a music building, he would be happy if the house could once more accommodate an orphanage as he believed that it would be an opportunity for the Church to make a major difference in people's lives.

"We are planning to see what else we can do with the building simply because we cannot bring it down because it is under the Jamaica National Heritage Trust.

It can be an art and craft shop, or we can make it an orphanage again, or we can do music classes," Father Kimani said.

Should the church be able to start an orphanage, it would take a lot of work and help from individuals and organisations outside the church as the current state of the building would prove unsafe for children. Father Kimani said funds had to be identified before renovations could take place.