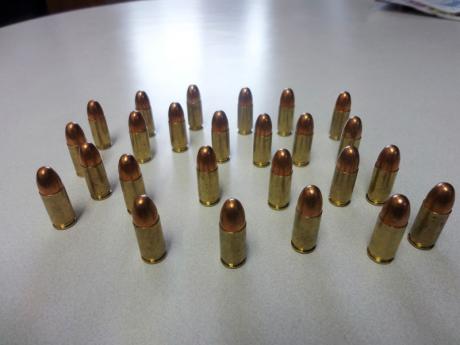 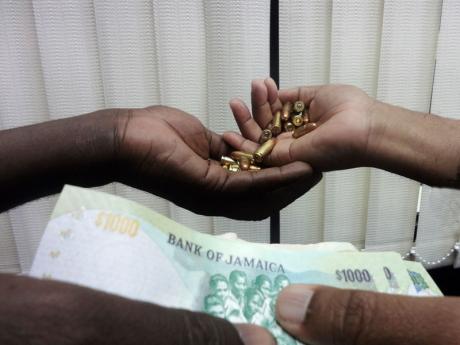 In Jamaica, a loaf of bread retails at a corner shop for about $235 while a single 9mm bullet can be bought for about $280 or less. The degree of difficulty in purchasing the bread or the bullet is relatively the same: zero.

A special Sunday Gleaner probe has confirmed that one does not have to work up a sweat to buy bullets on the streets of Jamaica. It is literally no problem, as we found out when we purchased 25 of these 9mm bullets last week.

Anyone interested in the purchase of bullets just needs a link to someone with connections to the criminal underworld.

"He has to know a person. It's like a recommendation," said a go-between, who was arranging the purchase of two dozen M-16 rounds for our news team last week.

That came hours after the news team had successfully purchased the 9mm bullets from another seller in the Corporate Area.

In that operation, an ex-convict introduced our reporter to an inner-city resident, who claimed he was tight with a licensed firearm holder who would sell us any number of 9MM bullets we wanted.

In a late-night meeting, the reporter was offered a box of 50 bullets for $15,000. While the alleged licensed firearm holder was not on the scene, he was in constant telephone contact with the go-between as the sale of half of the box (25 bullets) was negotiated.

The go-between also claimed that he had contacts with members of the security forces and could sell us other calibre bullets at any time.

In a second undercover operation, the news team met a man who offered M-16 bullets at a price of $400 each. The purchase of the bullets for the fully automatic M-16 rifle was to be done in a Kingston 13 community, but the middleman had to be picked up in another of Kingston's tough inner-city enclaves.

Because of a mix-up in the calibre of bullets we were seeking, that sale didn't materialise. It seems the seller was desperate to get rid of some 9mm shots and wanted us to take them instead of the M-16 rounds.

The news team refused and the go-between promised to make the link and provide the bullets we needed at a later date.

He explained that the illicit sale of ammunition is often marred by robberies which cannot be reported; therefore, persons involved in the trade only sell by reference.

"Nobody is going to just sell you like that because that comes with robbery," said the go-between, who alleged that licensed firearm holders and police personnel are involved in the illicit trading of bullets.

He said the cops are oftentimes the only ones who can provide certain types of bullets.

The contact claimed that the bullets used in the AK-47 assault rifles are the fastest-selling ammunition because of the popularity of the gun in the criminal underworld. He added that the AK-47 rounds are the most expensive because the demand drives up the price.

"Everybody has one of those (AK-47). That's why it carries the highest price. It sells like hot bread," he said.

In addition, the intermediary told our news team that west Kingston is the Grand Central Station of illegal ammunition because of access to the ports, where a significant portion of the illegal bullets enter the country.

"They have who to clear it and there is no bag a checking. Sometimes it comes in a fridge or a microwave that is addressed to a church or an abandoned building," he said.

Head of the Jamaica Constabulary Force's (JCF) Flying Squad, Senior Superintendent of Police Cornwall 'Bigga' Ford, admitted that the police have concerns about the easy access that criminals have to bullets.

Ford told The Sunday Gleaner that while he could not say how easy it is to purchase bullets on the streets, information reaching the police suggests that there is zero degree of difficulty.

"Me neva buy no bullet yet, enuh, so mi nuh know how easy it is. Mi only hear what people say - that it is easy," said Ford,

"Mi have information say that if you go on the road and you have sources, it is very easy to get," added Ford.

He would not be drawn on the reports that fellow cops and licensed firearm holders are pumping bullets into the illegal trade, but declared that the JCF is ready to arrest anyone involved.

"As me say, me nuh know, and if mi can get the information, mi will lead the task force go hold dem. Look here, if mi know about the licensed firearm holder or the police, mi a go lock dem up because dem same bullet deh will kill me, mi family and kill the other police dem," said Ford.

The veteran crime fighter said the Police High Command is very concerned by the illegal sale of even one bullet.

"Anything weh name bullet and gun, the police hierarchy is very concerned and dem always looking at new strategies fi deal with it.

"So, once intelligence a come in, the whole organisation … is mobilised to deal with that because is dem a kill off whole heap of ex-police, so we have to do everything to nullify that and catch the perpetrators," he said.

Ford explained that intelligence suggests that there is a geographical component to the prices placed on illegal ammunition, which vary from sale to sale.

"Prices vary from location to location. You have people leave from the rural areas and come town, so they are going to pay premium price. And the people 'round town, who know who they interface with and thing, might get it at the regular nominal price," he said.

The senior superintendent also pointed out that the police's gun and ammo recovery over the last few years has been significant.

He said the cops are fired up about shutting down the illicit bullet trade.

"We know that it exists and it is there. We are just using every means possible to try and recover them and get them off the road," said Ford.

He added: "If you look at the recovery for the past three years, every year, we recover over a thousand guns … and thousands of assorted ammunition."

Statistics obtained from the JCF showed that between 2009 and 2012, local law-enforcement officials seized 35,643 rounds of ammunition.

During that period, thousands of legally purchased bullets ended up in criminal hands, as police data showed that 7,384 rounds were reported stolen from legitimate firearm holders.

In less than three hours, The Sunday Gleaner's team completed the transaction and left the scene with 25 of the deadly bullets, which were subsequently turned over to the police Flying Squad.