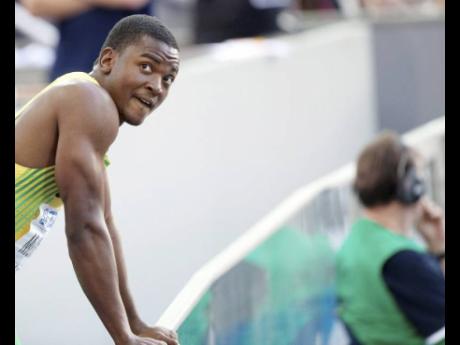 Chairman of The Jamaica Anti-Doping Commission (JADCO), Dr Herb Elliott, said yesterday that the commission was not surprised that the Court of Arbitration for Sport (CAS) upheld the lifetime ban on Jamaican sprinter Steve Mullings.

Sport's highest appeal court upheld the lifetime doping ban on the 2009 world relay champion yesterday and dismissed the 30-year-old runner's appeal of the ban imposed by JADCO in November 2011 after his second drug offence.

CAS said its panel rejected the athlete's claims that his 2011 test was "unreliable" and there were "problems" with the 2004 results.

"We had expected it as we had done all we had to do in carrying out the the doping control," Elliott told The Gleaner yesterday.

"We had a good legal man (attorney-at-law) in Mr Lackston Robinson who presented the case very well to the Jamaica Anti-Doping Disciplinary Panel," Elliott said. "In the meantime, Mr Mullings had brought in three different firms of lawyers and they tried to go back to the fact that the first doping case was not done correctly.

"They did not agree with that. We have demonstrated that it was done how it was supposed to have been done and yet he (Mullings) had never made any mention of that before," the JADCO chairman pointed out.

Elliott added: "The thing about it is that we had expected this (the decision by CAS) and we're happy that we have been exonerated. (But) we are also sad that a Jamaican athlete was banned because basically we are trying to keep our athletes drug free."

When asked whether or not the decision has tarnished Jamaica's good name in track and field, Elliott said: "Yes, there will always be people who are going to make and cast aspirations because we are now doing very well. This is one of the athletes who train overseas and while I have been branded that I am only catching 'overseas athletes' the record is there. We test all of them (local and overseas-based athletes) and in fact that is all we have to do."

Elliott also said his organisation has a mandate to carry out.

"We are carrying out the mandate given to us by the House of Parliament. Parliament passed a law that we are going to follow ... and, therefore, we followed the Act and we followed the WADA (World Anti-Doping Agency) code and the international federation code. And we are not going to spare anybody, if you are positive it will be looked into," Dr Elliott concluded.

When contacted yesterday the Jamaica Athletics Administrative Association president, Dr Warren Blake, said he was not officially informed at the time, but added "we would have no option but to go with the decision taken by CAS."

Mullings tested positive for furosemide, a banned diuretic and masking agent, at the national trials ahead of the 2011 World Championships. The former Vere Technical High Boys' Championships star had served a two-year ban after testing positive for methyltesterone in 2004.

He won gold in the 4x100 metres relay alongside Usain Bolt, Asafa Powell and Michael Frater at the 2009 World Championships in Berlin.