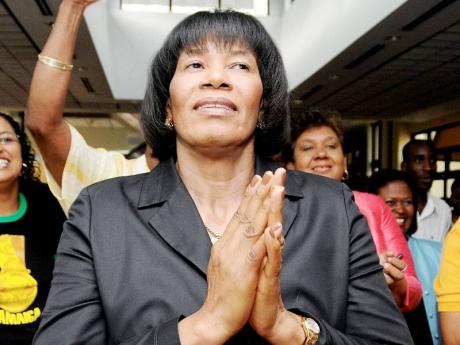 Simpson Miller: Sacrifice is in the interest of nation building.

THE NATIONAL Housing Trust (NHT) could be called upon by the Government to assist in ensuring the success of the economic programme Jamaica is pursuing with the International Monetary Fund (IMF).

Prime Minister Portia Simpson Miller announced at Jamaica House yesterday that the Government would be making concessions, through its agencies, to public-sector workers who have agreed to a wage freeze until 2015.

The Government is tapping the NHT to the tune of $11.4 billion each year over the next four years as part of its fiscal-consolidation programme.

As part of its economic programme with the IMF, the Government has said it will have to reduce public-sector wages as a percentage of gross domestic product (GDP).

Yesterday, government officials, trade union representatives and members of the private sector gathered at Jamaica House for a signing ceremony for a heads of agreement which, among other things, represented a wage freeze.

Horace Dalley, the minister without portfolio in the finance ministry, who led the Government's discussions with the unions, revealed that some major public-sector unions have agreed to change their negotiation cycle from two years to a three-year cycle. Dalley also said the unions have agreed to wage restraint, which represents five years of zero per cent increase for public-sector workers.

"We are grateful to them for this sacrifice and we intend to work with them and not to betray the trust that this administration has developed with them," Dalley said.

Meanwhile, Simpson Miller thanked the public-sector workers, who she said "once again are making this sacrifice in the interest of nation building … a huge sacrifice, not a small sacrifice".

The prime minister said the unions have put Jamaica first, adding that "no praise is too great for the leaderships of the unions who have demonstrated the highest levels of patriotic responsibility and concern for the national interest".

With Jamaica's wage bill as a percentage of GDP running at $147.6 billion this year, or 10.9 per cent of GDP, the Government has committed to the IMF that it intends to lower the ratio to nine per cent by March 2016.

The signing-off on a wage freeze is a necessary precondition for a deal with the IMF, whose board is due to consider a programme for the country this month.

In lauding the workers for agreeing to a wage freeze, Simpson Miller noted that if her Government fails to reduce the $1.7-trillion debt to manageable levels, the future of the country would be bleak.

"No one is more aware than I of the increased pressure on public-sector workers and their families during a five-year wage restraint and I would like to, on behalf of my administration, (say I) appreciate your partnership in these challenging times," the prime minister said.