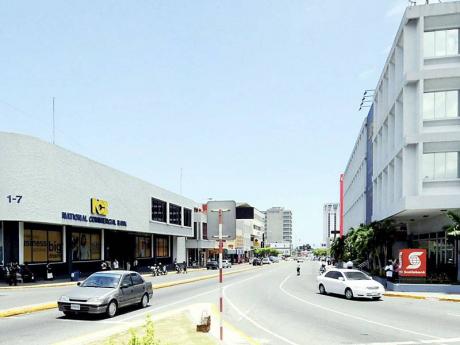 Jamaica's two largest banks sit on opposite sides of the street at the entrance to the New Kingston business district. - File

In the story titled 'Banks, credit unions shave savings rates', President of Scotia Group Jamaica Bruce Bowen commented that the bank had not adjusted rates since July 2012. The comment referred to the review period discussed in the story, June-December 2012. the bank says Scotia last adjusted deposit rates on February 11 and February 22, 2013

Funds saved with banks and credit unions earn just above two per cent interest per year, and are unlikely to perform any better over the next three to five years given the current low interest rate policy being pushed by the central bank.

The Bank of Jamaica's (BOJ) latest data on deposit rates indicates that savers received interest of 1.49 per cent on average in December, down 49 basis points (bps) over calendar year 2012.

In real terms, with annual inflation running at eight per cent in December, savers were experiencing more than six per cent negative returns on their deposits at that point.

Still, at yearend, interest paid on savings accounts ranged from a low of 0.1 per cent to a high of 8.5 per cent, the same range that obtained at the top of the year, January 2012.

"With the reduction in average market rates - GOJ bond coupon rates, BOJ deposit rates and recent T-bill rates - following NDX, there will most likely be some amount of reduction to savings, repo and other investment rates in the market," Bowen told the Financial Gleaner.

"If the market rates remain stable, I similarly would expect to see reductions in borrowing rates in the market over the coming months."

Scotiabank says its rates have held steady since last July.

In an analysis of rates done in January, financial products comparison website RateBee.com said saving institutions had cut deposit rates and that most consumers were unaware.

However, local bankers say that with loans becoming more competitive, savings rates will be impacted.

The prevailing average for savings account rate was 1.20 per cent, Williams said, with some financial houses paying no interest at all on deposits less than J$20,000 for the 60 products covered in her analysis.

"In at least five major financial institutions, deposits below J$20,000 are paid interest at a rate of zero. Especially in this challenging economic climate, consumers stand to lose significantly if they do not keep track of their interest rates," Williams noted.

RateBee, a 10-month-old inter-active website, allows consumers to compare savings rates and fees across various local financial institutions while shopping for the most competitive loans, saving and investment products.

One of the largest listed declines seen in Williams' analysis was community banker C&WJ Co-operative Credit Union (CWJCCU), whose Early Bird Savers Account and ordinary deposits have been cut by 200 bps.

Other large cuts ranged from 100 to 150 bps. One hundred basis points is equivalent to one percentage point.

"The reduction in savings rates is aligned to reductions in loan rates," said Glenworth Francis, general manager of the umbrella Jamaica Co-operative Credit Union League, speaking broadly for the movement.

One of the ways in which bankers make money is off the spreads between the cost they pay to hold customer deposits and the cost at which they sell loans from those deposits.

Currently those spreads are averaging 23 percentage points - or more than 2300 bps - for consumer credit, according to BOJ data.

There were significant declines in rates being charged for loans in the last six months of 2012, and savings rates have followed that trajectory, said Francis. However, savings rates have fallen at a slower pace, at less than one fourth that of loan rates, he said.

"The credit union rates are still competitive. Rates were once largely driven by unions seeking funding for their loan programmes. But it is smoothing out now because of supply and demand. The savings rate has been cut and the loan rates have been reduced even more significantly," Francis told the Financial Gleaner.

However, consumer credit has not fared as well, with BOJ data indicating a rise of more than three percentage points in the average consumer loan rate to 25.21 per cent up to December.

Barrington Whyte, general manager of CWJCCU, said that the cut in savings rates at his institution reflects market adjustments.

"The changes are reflecting overall costs. Because of market pressures on loan rates there has to be an adjustment on the deposit rate side," Whyte said.

He insisted that for the credit union movement, fees and charges are much less than what obtains in the commercial banking system.

Bowen, who said he was speaking as head of his bank and not as president of the Jamaica Bankers' Association, denied any recent cuts in savings rates at Scotiabank, while adding that he could not verify RateBee's analysis.

"I am not familiar with how RateBee obtains their market information as they have not made any arrangements with us to provide it to them. Deposit rate changes are, by policy, communicated before they become effective to our customers via our website and face to face," said Bowen.

"Our customers are quite pro-active in monitoring their accounts and staying up to date with rate changes via several channels, including our Contact Centre which is available 24/7 to provide information on rates as well as services and offers."

Bowen said the last rate change by Scotiabank was effected on July 23, 2012.

Williams, meantime, says she is urging savers to chase higher savings account rates and switch to better deals, after discovering that more than half of the savings accounts in RateBee's database recorded interest rate declines between June and December 2012.

"Most institutions made no public announcement about a decline in their savings rates," said the RateBee CEO, who formerly worked with National Commercial Bank Jamaica as project manager and business analyst in treasury operations before launching her own business.

"Most lenders make resounding announcements and launch massive marketing campaigns when they reduce their loan rates but are noticeably quiet when they reduce savings rates. Savers suffer because they are not generally aware of the adverse rate movement," she said.

Whyte of CWJCCU said that savers willing to sign contracts for long-term deposits can get as much as six per cent from the credit union's Golden Harvest account, which also provides insurance coverage.

However, he notes that most people are 'transactional depositors' who put money into accounts with short-term horizons for its use.

"There are costs attached to these transactions," he said.

The BOJ on February 25 effected another cut in its policy rate by 50 basis points to 5.75 per cent following the settlement of the NDX offer.

Such adjustments more immediately affect the cost at which the Government of Jamaica borrows from the market via bond issues and other securities, but have been used recently as suasion for the commercial banks, mortgage lenders and other institutions to adjust lending rates.

Prior to the execution of the first debt exchange, the JDX, savings rates at commercial banks were averaging 4.57 per cent at January 2010. They have fallen by more than half since then. Consumer loan rates, which were averaging 25.31 per cent, dropped to a low of 21.17 per cent, but have since climbed back to 25.21 per cent.