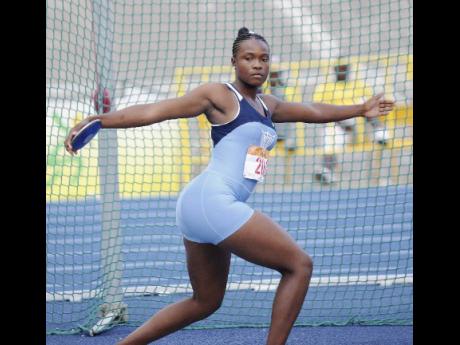 Edwin Allen High's Tara-Sue Barnett reclaimed her place in the record books as she not only bettered her ISSA/GraceKennedy Boys and Girls' Championships Class One discus record, but also established a national junior record yesterday.

Barnett retained her title with a throw of 51.15m to better the mark of 51.02m which was achieved by Kellion Knibb at the JAAA/Supreme Ventures National Senior Trials last year.

"I came here expecting to win the gold medal and that is what I did. I just executed," Tara-Sue said. "I wanted to do much better, but I won and I also PR and I broke the record, so for now, I will be satisfied with that, but later in the year, I will try to get a better distance.

"This is my last year as a junior athlete, so I want to leave the junior stage with a distance greater than 54 or 56 metres."

The silver medal was captured by Holmwood Technical's Gleneve Grange (49.05m), while Tasha Crosse, also of Edwin Allen, accounted for the bronze with a distance of 43.83m.

"I am happy to get the gold medal that I totally deserved and to give my school the nine points that they wanted, and I am also happy that my teammate managed to get a medal and score high," Barnett said. "My win is dedicated to my coach (Marlon Gayle), teammates, mom, family and my teammate Tasha Crosse because she has motivated me a lot at training and in competition."