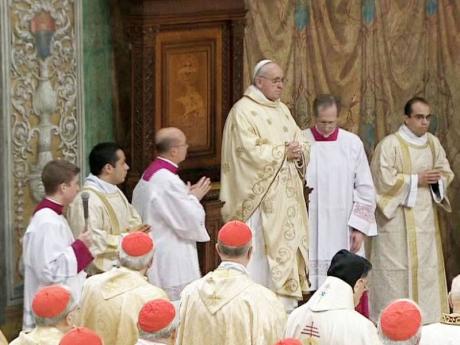 In this image made from a video provided by CTV, Pope Francis (centre) celebrates his inaugural Mass with cardinals, inside the Sistine Chapel, at the Vatican on Thursday, March 14. As the 266th pope, Francis inherits a Catholic church in turmoil, beset by the clerical sex abuse scandal, internal divisions and dwindling numbers in parts of the world where Christianity had been strong for centuries.

Pope Francis put his humility on display during his first day as pontiff yesterday, stopping by his hotel to pick up his luggage and pay the bill himself, in a decidedly different style of papacy than his tradition-minded predecessor, who tended to stay ensconced in the frescoed halls of the Vatican.

The break from Benedict XVI's pontificate was evident even in Francis' wardrobe choices: He kept the simple pectoral cross of his days as bishop and eschewed the red cape that Benedict wore when he was presented to the world for the first time in 2005, choosing instead the simple white cassock of the papacy.

The difference in style was a sign of Francis' belief that the Catholic Church needs to be at one with the people it serves, and not imposing its message on a society that often doesn't want to hear it, Francis' authorised biographer, Sergio Rubin, said in an interview on Thursday with The Associated Press.

"It seems to me for now what is certain is it's a great change of style, which for us isn't a small thing," Rubin said, recalling how the former Cardinal Jorge Bergoglio would celebrate Masses with ex-prostitutes in Buenos Aires.