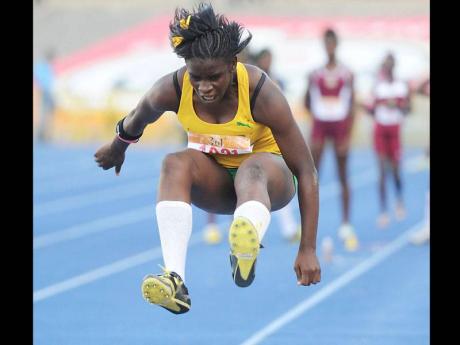 Though not as dominant as they were on Wednesday's second day, the Clarendon-based school stretched their lead to 29 points at press time with six finals completed, having amassed 61 points. They are followed by St Jago (32), with Holmwood Technical (31), Vere Technical (21), and Manchester High (17) rounding out the top five.

A championship-equalling jump by St Jago High's Kimone Shaw in the Girls' Class Four long jump was the highlight of the day.

Shaw pulled off a mild upset to win the Girls' Long Jump Class Four, with a personal best mark of 5.52m to equal the championship record, with she now holds with Opal James.

Edwin Allen's first encounter with disappointment came in the Girls' 400m Class Two when 2012 silver medallist Saqukine Cameron faced the starter but was disqualified after a false start. She has a hamstring injury and is doubtful for the remainder of the championship.

Cameron faced the starters in the 400m, so she could be eligible to attempt the defence of her Class Two 200m title. If she had not shown up for the one-lap event, she would not have been able to compete in any more races.

Defending champion for the event, Yanique McNeil of Vere Technical, finds herself having only the fifth-fastest time going into today's semi-final as she posted 56.40 seconds to win heat one. The fastest qualifier is St Andrew Technical's Cameka Witter (55.43) followed by Holmwood Technical's Shenice Cohen (55.51) and Papine High's Tiffany James (55.85).

Due to inadequate entries, there were no preliminaries for the 400m Class One with the semi-final set for 2:15 p.m. today.

Convent of Mercy Alpha's Gabrielle Foster captured gold in the Girls' High Jump Class Three after being the only competitor to clear 1.68m.

Toni-Ann Farquharson of Wolmer's High was second with 65m while Colestia Baker of Holmwood Technical was third, also with 1.65m mark .

"It's amazing! I can't believe it!" Foster said. "Last year I placed third, and I was determined that I was going to come and be the gold medallist," she added.

The stage is set for what promises to be one of the most keenly contested events on the girls' side of the championship as Holmwood Technical's Yanique Thompson (11.87 seconds), who won at the Carifta trials, has the fastest time going into the semi-finals of the Class Two 100m. She is followed by teammate Dianna Johnson (11.99) and Wolmer's Jonielle Smith (12.02). Wolmer's Shauna Helps, who is yet to lose a 100m race at Champs, has the sixth-fastest time of 12.41 seconds.

The battle for the Class One 100m gold medal is expected to be between World Junior semi-finalists Jodean Williams of St Mary High and Edwin Allen's Monique Spencer. Williams has the fastest time going into today's semi-final as she clocked 11.84 seconds to take heat four. The second fastest qualifier is Holmwood Technical's Chanice Bonner (11.91). Spencer is the fourth-fastest qualifier with 12.06.

Twelve finals are down to be contested on today's penultimate day with the first being the Girls' Javelin Open at 8:35 p.m. while the ultimate set of finals will be the 100m in all classes.