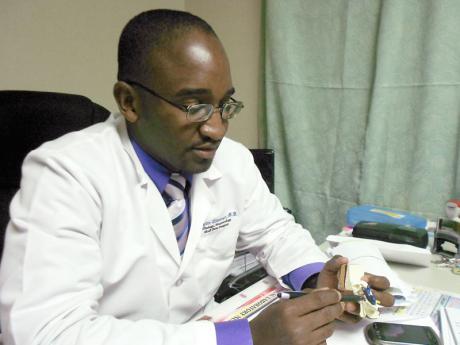 A significant number of children doing poorly in school could be having hearing troubles which often go undiagnosed.

He said this problem is often misdiagnosed or not considered a problem until it was too late.

"This is what I normally recommend to parents, especially parents with children going to school. When you are doing your checklist and you are checking for books, bags, shoes, check hearing test as well," Channer told The Sunday Gleaner.

"I think we overlook this sensory pathway. All the books in the world can't help if you can't hear," added Channer during an interview at his offices at Andrew's Memorial Hospital.

Channer, who is the Caribbean's leading authority on Neurotology, (the clinical and surgical management of the ear and surrounding structures) plies his craft full-time at the Kingston Public Hospital (KPH) and is encouraging medical interns to adopt this field for specialisation as the skill is badly needed.

"I see kids coming to me for simple problems like fluids in the ear. When you do a hearing test they have lost more than half of their hearing. When you ask mom if the child can hear, she said yes, but you have to talk more than once and you have to shout," Channer explained.

"I almost lost my cool when I saw a teenager at KPH at age 14 years who is not speaking. After examination, he was found to have profound hearing loss. I asked his mom, why you bringing him now. She wanted to bring him in so she can sign up for disability, to get some money," added Channer, as he warned that this child might be permanently deaf because the hearing problem was detected so late in life.

According to Channer, it was almost unethical for anyone to have passed that child out of the primary-school system to the secondary system without recognising that he was unable to hear.

"He can't hear, he can't talk. Those things break my heart," the doctor said as he noted that some parents are missing clear signs of problems with their children.

Channer noted that in many cases, Jamaican parents believe their children are unresponsive because they are stubborn.

"Most times it does not occur to parents that a child may not respond because he cannot hear. So I find that the link between an unresponsive child and repeating instructions from parents or guardian is often missed. It's difficult for me to know that something can be done and to watch it slide, "he stated.

Channer, who speaks with passion about his work, said patients are referred from everywhere to him at the KPH, where only one day per week is allotted for surgery.

He said, in some first world countries, a new born is not released from hospital until a hearing test was done. A basic hearing test takes about 15 seconds.

"A hand-held gadget is used and it gives a pass or refer result. Pass means hearing is good, while refer means that the hearing could not be satisfactorily assessed, and a retesting is done at a later date."

Lamenting the lack of importance placed on hearing, Channer said, "the problem is that no one assesses for hearing in Jamaica and when the child presents with speech problems at age three and four years, you have already missed the boat."