'Lock him away!' - Corporate Area businessman heads to court; cops hope he will remain behind bars 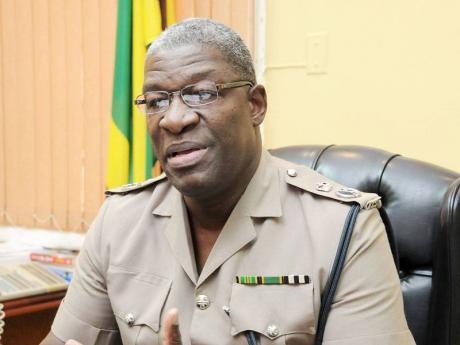 The Corporate Area businessman arrested by the police last week in connection with several major crimes is to appear in court today, and the police are hoping that he will not be granted bail.

As reported by The Sunday Gleaner, Uriel Humphrey James, better known as 'Rooksie', was arrested by members of the Major Organised Crime and Anti-Corruption Task Force in connection with incidents of murder, shootings, money laundering, and other crimes.

It is believed that some members of the force are on the payroll of the businessman-contractor, and the Police High Command has vowed to go after the dirty cops.

"We are concerned that there has been improper association with this individual by a number of police personnel," Police Commissioner Owen Ellington told The Gleaner even as he indicated that he did not want to break the spirit of the honest, hard-working policemen and women in the Kingston Western Division.

"Because this is an ongoing investigation, to say more could hurt the investigations, but I have tasked the ACB (Anti-Corruption Branch), which is part of the task force working on this case, to conduct the probe," added Ellington, who declined to give any details about the cops under probe.

Ellington argued that if he were to say more at this time, he could tip off persons who are the subject of the investigation. He added, however, that he was concerned about Rooksie's "corrupting influence on members of the police force".

He said that the police were concerned that once Rooksie was on the streets, violence increased in and around the south St Andrew community of Rose Town, where he allegedly leads the deadly criminal group called The Discipline Gang.

"My concern is about his ability to return to the streets, and once he is free, there is an upsurge in violence," said Ellington.

It is alleged that at least seven persons, who have made allegations against Rooksie, have been murdered. While the police are yet to confirm these numbers, investigators yesterday pointed to a least one witness who had been killed. They also raised concerns about the alleged gangster's access to information about witnesses.

The investigators said during a search of Rooksie's upper St Andrew house last week, two witness statements, which implicated him in a number of murders and robberies, were found.

"The possession of these witness statements is very troubling, particularly in light of the fact that one of the witnesses has been murdered, and the other is the subject of several threats," charged the cops.

The cops also alleged that a police station receipt that was intended for the victim of a shooting incident was found at Rooksie's house. "(He) was not the victim in this shooting, yet the receipt was found in his possession, and he had no satisfactory explanation as to how he came by the receipt."

According to the investigators, whenever Rooksie is taken into custody, public support for the police in and around Rose Town increases, and fear of crime is noticeably reduced.

According to investigators, the names of four persons who have given statements implicating Rooksie in crimes were found written on pieces of parchment paper and placed on ice - literally.

The explanation given to the police was that this was intended to keep the witnesses cool - that it would have the effect of cooling them down. Investigators said they were told this in clear reference to the practice of obeah.

Several Jamaicans going to court have resorted to the centuries-old practice of obeah to see them through.

From the oil sprinkled over the body or in the courthouse, to the padlock on the mouth of an animal, or spending quality time with a "monkey", persons have gone to the obeah man in an effort to avoid prison time.