Nervous but confident on first day of GSAT 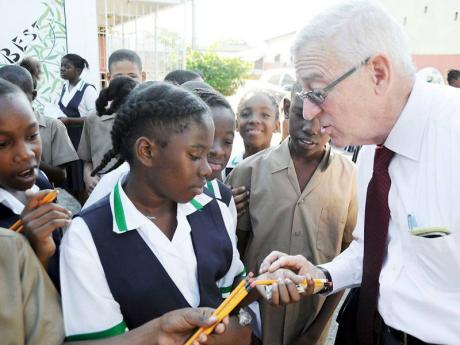 Minister of Education Ronald Thwaites, giving some words of encouragement to Brittney Thomas before the GSAT exam. 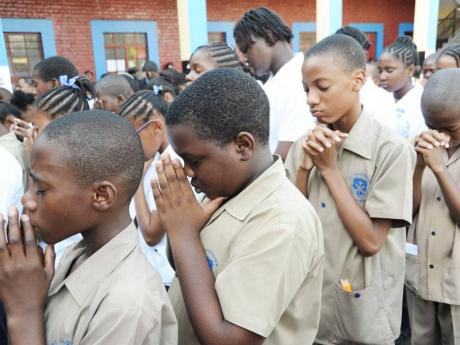 Students at St Aloysius Primary School in Kingston have their devotion before the GSAT exam at the school yesterday. - photos by Norman Grindley/Chief Photographer 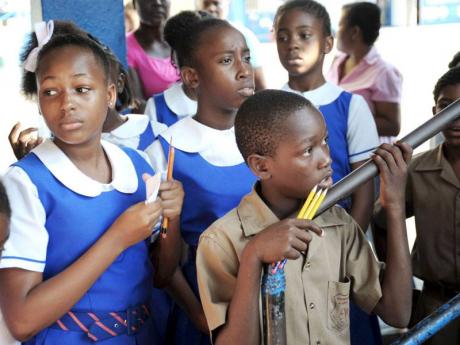 Students at Windward Road Primary and Junior High School before the GSAT exam in Kingston yesterday. 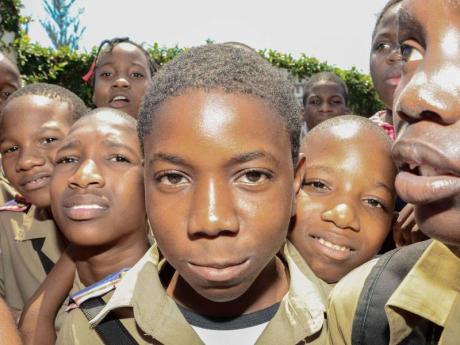 Supported by a pair of crutches under her arms, her left foot in a cast and elevated, 11-year-old Shanakay Lee's face brightened with a beautiful smile as she hugged Minister of Education Ronald Thwaites.

"I was a little nervous, but now I don't feel so nervous," she shared with The Gleaner.

At 7:30 a.m. yesterday, students at the Calabar Infant Primary and Junior High School in Kingston listened attentively as Thwaites delivered a pep talk at the beginning of this year's two-day Grade Six Achievement Test (GSAT).

"I feel like I'm going to pass. I want to go to Excelsior (High School)," Shanakay stated.

Schoolmates Iesha Mitchell, 11, and Jeovannie Rose, 12, also shared their anxiety but also their confidence in taking on the challenge for which they have been preparing, beginning with the mathematics and social studies papers.

Over at St Aloysius Primary School in Kingston, parents hugged and kissed their children as they bid them good luck at the end of the morning devotion.

Tanya Gibson held her daughter and niece tightly, urging them to relax and do their best.

With a sigh, she shared, "I know they will do their best, and I am looking for the best. The teacher part of me is calm, but the mom in me is nervous."

Her niece, Stephanie Roberts, age 12, and daughter, 11-year-old Lee-Anya Richards both shared that they were looking forward to the exams with much excitement.

Dwayne Lovemore waited until his son, 11-year-old Taijan, made his way to the examination room.

"I am nervous but confident he will do well. I am heading to work now, but I will be thinking about it all day," said Lovemore, whose son is looking forward to attending Wolmer's Boys' School in September.

At Windward Road Primary and Junior High School in Kingston, 11-year-old Shadiamon Wint said she wasn't at all nervous, as she was confident she would earn a place at Holy Childhood High School.

"The only school she wants to go is Camperdown (High School). She talks about no other school. She loves to run, and Camperdown is the only place she wants to go run," Paula-Ann Clarke shared about her daughter, 12-year-old Aashna Fannell.

"Is KC (Kingston College) my boy want to go so him can run for them," said Sophia Chuck in reference to her son, 11-year-old Rojea Chuck.

At minutes after 1 p.m., Jonie Morgan and Brianna Barnett, both 12, were the first to emerge from the examination room at John Mills Infant, Primary and Junior High in St Andrew as the first day of GSAT concluded.

"It was fine. I think I pass for my school, Excelsior," Jonie stated.

"It was a little easier than I thought," Brianna added, hoping for a place at Merl Grove High School.

Twelve-year-old Daniel Davis said he found the exams challenging, but did his best for a place at the school of his choice Excelsior.

Outside the gates of Rousseau Primary School in St Andrew, several students giggled, many sharing that the exam was easier than anticipated.

"It was cool and fine. I enjoyed it so much. It was easy," beamed Crystal Cunningham, 12, who wants to attend Excelsior.

Quite relaxed on the swings on the compound of Wolmer's Preparatory School in Kingston, a group of boys laughed as they were lost in the freedom of gravity and the relief of getting over the hurdle of GSAT's first day and expect today to be no different.

"It was easy, especially maths. I feel like I pass for the school I want to go (Campion College)," stated schoolmate Molly Wallace, 12.

Today, the 43,000 GSAT students in 1,184 centres across the island will tackle the language arts, science and communication task papers.

Several school officials have reported that everything went smoothly on the first day.

"The initial reports I got indicate that in all but one of the regions, everything has gone very well, and I expect the same for tomorrow," said Elaine Foster-Allen, permanent secretary in the Ministry of Education, yesterday.

One centre in St. Ann, located in Region Three, reported problems with the mathematics paper, however, Foster-Allen said it was resolved.

"The officers in that region, led by the regional director, did what they had to do to make the corrections on the spot without much delay for the children," she said.