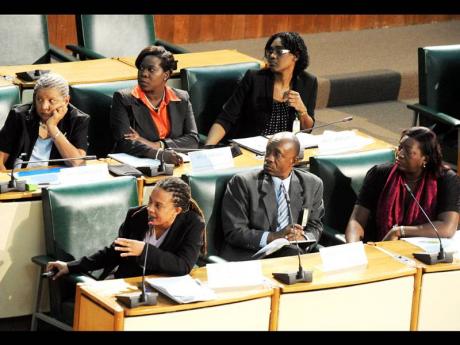 Dionne Jackson Miller (front left), member of the Press Association of Jamaica makes a presentation before a joint select committee of Parliament that is reviewing the cybercrime law. Also in the picture are from front left Byron Buckley, Jenni Campbell, president. At the back from left are: Clare Forrester, Ingrid Brown and Celia Morgan. - Norman Grindley / Chief Photographer

THE PRESS Association of Jamaica (PAJ) and Media Association Jamaica (MAJ) have urged members of a joint select committee reviewing the cybercrime law to reject proposals to include criminal defamation in the amended law.

In earlier submissions to the committee, the Jamaica Constabulary Force and the Office of the Director of Public Prosecutions argued that cyber-defamation should be criminalised in the proposed new statute.

Cyberdefamation is committed on the Internet through websites, blogs, Twitter, Facebook, emails, chat rooms, instant messaging, and other forms of social media.

Against freedom of Expression

In a robust presentation to the committee on Wednesday, Dionne Jackson Miller, a PAJ representative, argued that a proposal to criminalise cyberdefamation was inconsistent with efforts to reform defamation laws in Jamaica, and would go against current international trend.

Jackson Miller told committee members that criminalising cyberdefamation was detrimental to freedom of expression, noting that freedom of the press was a subset of this constitutional right.

"The courts can, and in the case of decided case law, have shown that they are quite capable of dealing with the issue of cyberdefamation in the context of civil law, which is where we believe that defamation belongs," she reasoned.

"If Jamaica were ever to take the backward step of actually passing a law, criminalising cyberdefamation, Jamaica would be sending a message to the international community that it condones and intends to implement what has been increasingly recognised as an archaic law," she added. She concluded that any such move would not go unnoticed locally or by international watchdog groups.

MAJ executive member Shena Stubbs-Gibson echoed similar points made by the PAJ, but emphasised that it would be "draconian and imprudent to introduce criminal remedies for expressing oneself on the Internet" at a time when there was a united effort to remove criminal penalties for defamation in all other forms of media.

Stubbs-Gibson reminded the committee that another joint select committee of Parliament which considered the defamation law had expressed unanimous support for the abolition of criminal libel.

She said increasingly, the average Jamaican was using the Internet as a ready forum to express themselves. Stubbs-Gibson cautioned that "Parliament must be careful to resist any attempt to introduce any change to the cybercrimes Act, which could expose a large percentage of poor Jamaicans to the risk of being classified and treated as criminals without sufficient cause."

However, committee member Senator Imani Duncan-Price advised both the PAJ and the MAJ that following the committee's deliberations, a report would be sent to Parliament. According to her, during the parliamentary debate, members would examine the pros and cons of the bill and would not necessarily act as a rubber stamp for the committee.

Other committee members raised concern about cyberdefamation and suggested that civil remedy was not sufficient, at times, to punish persons who seemingly wilfully defame others.

However, both the PAJ and MAJ noted that a libel suit was a serious deterrent as it could wipe out the average media house in Jamaica.