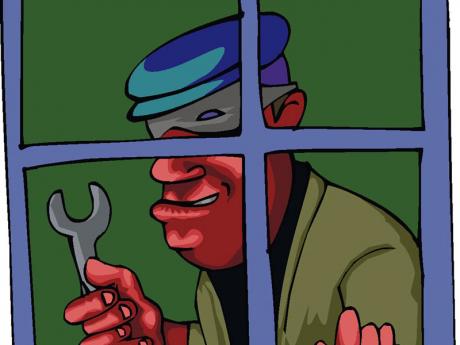 Western Bureau:Two men who attempted to break into a Falmouth cambio under the cover of darkness early yesterday morning had their bid foiled by police, who shot and injured one while the other fell from the building and sustained serious injuries.

Under police guard in the Falmouth Hospital are 28-year-old Junior Brown and 25-year-old Anthony Maragh, both unemployed of Falmouth addresses in Trelawny. Brown is reportedly nursing a gunshot wound to his ankle while Maragh is believed to be suffering from bone fractures.

According to police, approximately 3:30 a.m., the men - armed with crowbars, cutting pliers, grille cutters and chisels - climbed on top of the National Commercial Bank (NCB) building in Water Square and made their way to the top of the nearby Cambio King establishment.

After disconnecting the electricity and cutting the grille to the cambio, they were confronted by a police patrol. The men then climbed back on top of the bank with the police in hot pursuit. Gunshots were fired and, in the melee, Brown was shot and injured while Maragh fell off the building. The sound of the gunfire attracted a large crowd, which converged on the scene.

"They cut the JPS line leading to the building, so the building was in darkness," a policeman told The Gleaner. "We ended up having to call the JPS to restore the light so that we could carry out our investigations."

According to Carol Pusey, the Independent Commission of Investigations' (INDECOM) senior investigator in western Jamaica, his team was early on the scene and managed to interview the officers who were involved in the incident and the two accused men.

"We have basically wrapped up our investigations," said Pusey. "The men confessed to the break-in attempt and it is my understanding that they will be charged."

Interestingly, at the time the INDECOM team visited the hospital, one of the men was reportedly still wearing the gloves he had allegedly worn in a bid not to leave fingerprints behind at the crime scene. Another pair of gloves and a Halloween mask were found on top of the bank.