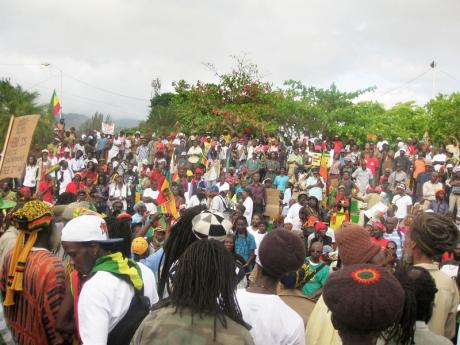 A section of the large crowd in Mandela Park. 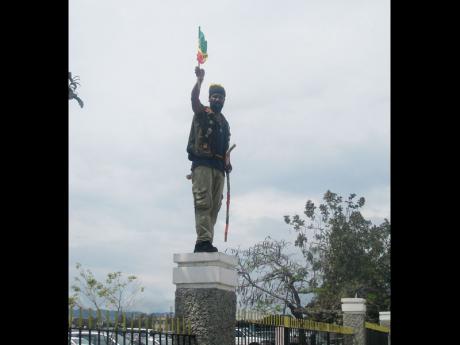 A Rastafarian man stands on a column at Natinal Heroes Park, Kingston, on Thursday afternoon.-photos by Mel Cooke 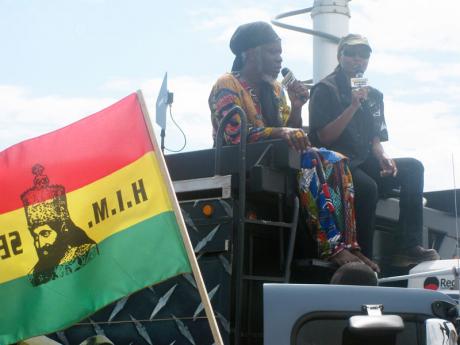 This weekend, the Rastafari Movement marks 50 years of what is referred to in officialdom - the few times it is - as the Coral Gardens Incident. Among the activities were last Thursday's protest march from Parade to Heroes Circle in downtown Kingston (the Tivoli Incursion of 2010 part of the protest's focus), then a motorcade to Mandela Park in Half-Way Tree for a well-attended rally.

In Montego Bay, where the anniversary of the 'Bad Friday', 1963, incident have been held consistently, a symposium was slated for the Pitfour Nyahbinghi Centre on Friday. Queen Ifrica, Chronixx, Jah9, Warrior King, Tarrus Riley, Tony Rebel, Junior Kelly and Bushman were among the long roster of performers advertised for a concert at Jarrett Park on Saturday evening. And today, Andrea Williams Green's IRIE FM Running African programme is scheduled to be aired live from Jarrett Park between 6 a.m. and 10 a.m.

However, there is no softening of what was done to Rastafari in 1963 in the overview of the second Rastafari Studies Conference & General Assembly, slated for August 14-17 at the University of the West Indies (UWI), Mona, and various Rastafari Centres. It begins: "As Jamaica proudly celebrates her 50th jubilee of political independence, the Rastafari Movement also marks the 50th anniversary of the Coral Gardens Massacre, an event that still haunts the wider society through the perennial, but unanswered, Rastafari calls for justice."

And it does not confine what happened to Coral Gardens: "On Holy Thursday, April 11, 1963, six bearded men, assumed to be Rastafarians, attacked a gas station in Coral Gardens. They were reportedly armed with guns and machetes. This resulted in a skirmish and the death of two policemen, and six civilians including three of the assailants."

"In response, the then Prime Minister Sir Alexander Bustamante instructed the army and police to bring in all the Rastafari not only in St James, but also in Hanover and Trelawny. If the prisons could not accommodate them, they were to be 'disposed' of - killed and taken to Bogue Hill - above a major cemetery in Montego Bay. The events of Holy Thursday 1963 thus resulted in a collective crucifixion of many innocent adherents of the Rastafari faith and crackdown on the movement islandwide."

The conference's theme is 'Commemorating the 50th Anniversary of the Coral Gardens Massacre'.

The IRIE FM Shockwave truck with two of the station's broadcasters, Mutabaruka and Andrea Williams Green, sitting high above the cab, marshalled the motorcade section of Thursday's protest. Mutabaruka's 'Stepping Razor' programme was broadcast live from Mandela Park with various speakers. As it closed off, Mutabaruka said "where we go from here is a big question".

In an interview before Thursday's march, he had also looked to the future.

"This is just the start of something. In numbers, there is strength. The more people get together, the more highlight it will get, it will go international. People will realise is a serious thing happening in Jamaica and force the authorities to do something," Mutabaruka said part of those concrete results is redress for those victmised in the Coral Gardens incident. "They have to acknowledge especially the atrocity to Rastafari 50 years ago and pay some form of compensation to the victims," he said.

The possibility of payment for the victims is also in the overview for the Rastafari Conference, as the overview states: "Fifty years later, there are still living victims of the incident, some of whom continue to suffer the effects of that experience and could easily make justified claims for reparation, and more critically, there has never been any attempt to officially provide restitution for these people."

With the Coral Gardens commemorations being extended into Kingston for the half-century mark, in closing of the programme on Thursday, Mutabaruka said, "the moment in time was great. The moment is one we cherish. It is the Art of War, and when people hear the Art of War them must understand we no come with no ordinary programme."

"We no get sponsored by no rum company or no skin-out jerk company to come out here. IRIE FM say the voice of Stepping Razor is a very important voice," he said. The sign-off song was Peter Tosh's 'Get Up, Stand Up'.

The Shockwave truck, a part of a large Rastafari presence, listened to the speakers inside the park, where one speaker was focused on reparations. "We say oonu do de crime, oonu haffi go pay the fine or do the time," he said. He questioned how Prime Minister Portia Simpson Miller did not ask Britain's Prince Harry about reparations for slavery when he visited Jamaica and, as the evening closed off, as scheduled, at 6 p.m., a chant was raised about Coral Gardens.

It goes in part:

We shall never forget the Coral Gardens incident

The crimes committed by the State

Oh, what a crime

The crime committed by the State

The orders from the State when the jail coulden hold

To put them in the cemetery a Bogue

Fifty years gone by and the powers that be

Don't pay for the atrocity

A time in our history

That we must ensure

Don't come knocking at our door.

Although the 2013 Rastafari Studies Conference's theme is about the Coral Gardens Massacre, the call for papers shows a broader scope. Among the areas of focus are Rastafari and Africa; Rastafari Resistance and Social Justice (which includes testimonies, perspectives and recommendations on Coral Gardens, as well as 'Pinnacle: The Past and Future'); Expressions of Indigeneity: Exploring an Emergent Rastafari Conception, Rastafari Organisation and Centralization: From Leonard Howell to a Millennium Council; and Rastafari Livity: Humanity's Hope. Abstracts not exceeding 300 words and including the title of the proposed paper, a summary of its arguments and list of keywords should be submitted by May 1, 2013, to Dr Jahlani Niaah at the email address rastafaristudiesconference@gmail.com. More information is available online at ocs.mona.uwi.edu/index.php/rsc/2013, www.facebook.com/rastafaristudiesconference and twitter.com/RastaConference.