Coming after you! - JCF wants firm action against gun criminals 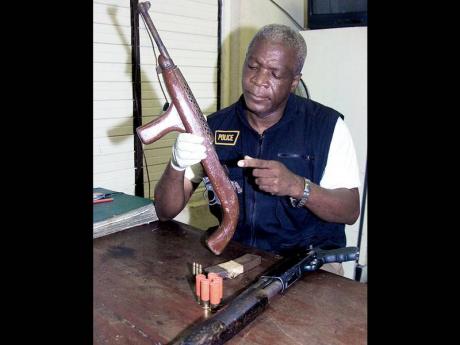 Seeking to take the monster of crime by the scruff, the Jamaican police have proposed radical legislative changes that would provide, among other things, lengthy prison sentences for gun-related crimes.

The recommendation forms the linchpin of the Jamaica Gun Project, an initiative conceptualised by the Jamaica Constabulary Force (JCF) to stem the hundreds of gun-related crimes the island records each year.

"Gun offenders give us the equivalent in Jamaica of one 9/11 attack per week," the JCF is reporting in reference to the terrorist attacks on the United States in September 2011.

"So any talk we have about Vision 2030, about making Jamaica the place of choice to live, work, raise families and conduct business … all of that is just talk if we don't deal with firmly gunmen," a senior officer told The Gleaner.

He continued: "Jamaica has the third-highest murder rate in the world behind Honduras and El Salvador. We have the second-highest rate of gun murders in the world or 47 per thousand of the population as of 2012."

Statistics compiled by the JCF show that in the last 10 years, 10,528 murders have been committed by the gun in Jamaica. The data also shows that for the same period, the police recorded more than 8,500 shootings, injuries by the hand of criminals, while guns were used in more than 17,000 robberies.

If the proposed gun project finds favour with lawmakers, it would provide, among other things, mandatory minimum sentences of up to 20 years for persons convicted of a firearm-related offence.

"If you hold a man with an illegal gun which has been matched by IBIS (International Ballistic Identification System) to other crimes such as murders, shootings or armed robberies, then, in addition to the mandatory minimum, you get an additional five years for each additional crime," the senior cop suggested.

"Let him explain who else was handling the gun. Because if he can say to me that this gun was being handled by Tom, Dick and Harry, I can go investigate them and arrest them," he added.

Other key components of the proposal include the enactment of laws to make the trafficking of firearms illegal and the refusal of bail to alleged gun offenders until their trials are completed.

In relation to those persons who critise the denial of bail the officer posited: "Tell your lawyer be prepared for a speedy trial … and if you are so convinced about your innocence, don't ask for any adjournment … . Demand to be tried speedily," he reasoned.

The proposal would also require the country's clogged up justice system to give top priority to gun-related cases, ensuring that they go to trial quickly.

"So it doesn't matter how many cases are there lined up, gun offences are to be treated as priority so that if they are innocent they can be acquitted quickly, so you would probably have a number of courts that are dedicated to gun trials," he reasoned.