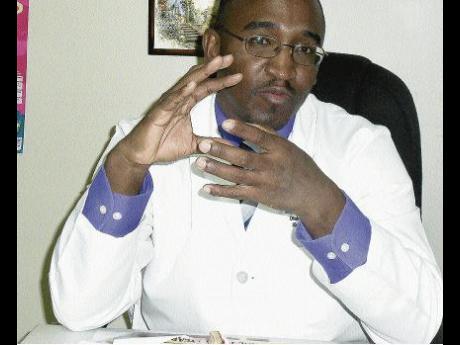 Dr Guyan Channer is an ENT consultant specialising in otolaryngology and neurotology. - Photo by Erica Virtue

After a very long day at the Kingston Public Hospital (KPH), exhaustion was etched all over his face. But his reassuring voice was like music to the ears, and rightly so. Dr Guyan Channer is an ear, nose and throat consultant (ENT), and his job is to be in your ears every day.

His reassuring voice and gentle, compassionate demeanour explain why his patients refused to reschedule their appointments that day - although they knew he would be more than three hours late for his clinic at Andrews Memorial Hospital.

Despite the lengthy wait and a waiting interview, he spent at least 45 minutes with each patient.

As a ENT consultant specialising in otolaryngology and neurotology, Dr Channer diagnoses and manages diseases of the ear, nose, sinuses, larynx (voice box), mouth, and throat, as well as structures of the neck and face. Neurotology, he explains to Outlook, is a medical specialty within the field of otolaryngology which relates to ears, nose, and throat, and conditions treated in neurotology which include cancers of the head and neck, ear infections, and problems with nerves of the face.

"I believe I have a responsibility to let people know that, if there is one person with the need for this specialisation, it is available here," he stated passionately.

Dr Channer's interest in medicine was born of his observation of the selfless attitude of his mother who is a registered nurse.

Her love and dedication for her job impacted him greatly, and casting all other career options aside, he decided to study medicine. When he entered the Medical Faculty at the University of the West Indies in 1997, he was the top entrant in the region.

It was close to midnight when we finally sat down for the interview, and it did not take him long to start reeling off information from his years of study, making the ear sound beautiful just by the way he pronounced its three letters.

"The beauty of the ear is that it has the organ of hearing and balance right there, side by side," he told Outlook passionately. He continued, "Now, everything to do with hearing and balance can be affected by something affecting just one part of the ear. So, there are a lot of patients in Jamaica who are being under-managed because of a lack of exposure to this field," he explains.

The only one with his specialisation in the English-speaking Caribbean, he developed a keen interest for otolaryngology during medical school and pursued this at the University of the West Indies and at several institutions in the United Kingdom. He completed his residency in otolaryngology in 2008 and was once again the top performer across all surgical disciplines.

He notes that patients with hearing and balancing disorders can have both restored.

"The key thing about the organ of hearing is that we have the cochlea implant - which is a device that you can put into the organ to take over when you have lost the receptors in there. It is the only device that can replace a sensory deficit," he explained. What makes the ear special is that, unlike the other senses, there are no replacements for sight, touch or taste.

"I see so many patients being told that the only option is sign language, and a lot of children and adults can be helped. There are adults who may have sudden hearing loss, who do not recognise that a number of things can be done to restore their hearing," Channer said with regret at the number of untreated cases which result in permanent damage.

Cochlear implants are a last resort and will not be needed if hearing aids can assist, he explains. He notes that, in a lot of instances, medications given for dizziness and lack of balance are only treating the symptoms, but the problems are not being diagnosed. "It made me realise where we are not at in Jamaica. It is sad but true that we are nowhere near where we should be in terms of cutting edge where this is concerned. People need help to hear. There are cases where patients may have problems with the small bone inside the ear, it needs to be replaced, there are patients who may have tumours in the ear, as a matter of fact, today was a tumour day," he explained.

Unlike some other cancers which present early symptoms, cancer of the ear does not, and there are many 'growths' that can affect the proper functioning of the ears.

"If something is wrong with your ears, the average doctor will give you painkillers, ear drops, antibiotics for everything, and a lot of time the problem is not recognised until it's often too late," he laments.

He notes that, in a lot of cases, it's misdiagnosis. He explains that the nerve from the ears to the eyes can give the impression of a stroke, and many times those conditions were not managed well, and surgical options were often last on the list.

With an overwhelming sense of regret, he said he wished proper diagnosis would be done and is sad about the limited surgical options.

He notes that training from professionals who only work with the ears has a lot to offer to the profession, and he is now training more residents to take up this specialisation.

"The sad thing is that we are only given one day per week for operations at KPH, and one operation can be an entire day," he bemoaned.

He notes that neurotologists work hand in hand with other specialisations such as neurosurgery, especially if an implant is to be placed directly in the brain to restore hearing.

This Munro College old boy is passionate about his job and wants parents to check their children's hearing from an early age. He said hearing should be on the checklist of things checked before returning to school.

If not assessed early, by the time the problems become obvious at ages three to four, they have already 'missed the boat'.

His hope is that more residents will become interested in the specialisation so that Jamaica may become the hearing nation.